We condemn, reject it without reservation: Ruto on Raila’s attack

• Ruto said that every politician has the right to sell their agenda in every part of the country.

• A group of rowdy youths heckled his rally in Iten, denying him an opportunity to sell hi manifesto heady of the August 9 elections. 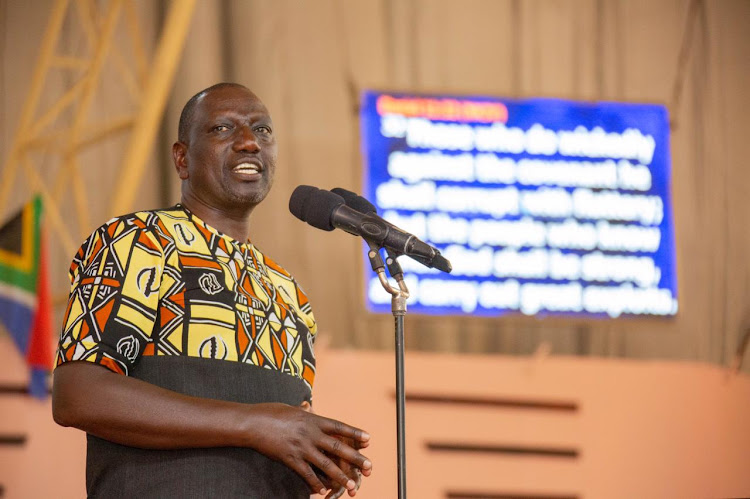 Deputy President William Ruto has condemned an attack that was meted on ODM leader Raila Odinga during his day-one visit to the North-Rift region.

A group of rowdy youths heckled his rally in Iten, denying him an opportunity to sell his manifesto to residents.

The incident forced him to cancel his campaign and head to Uasin Gishu where Mzee Jackson Kibor was being laid to rest at.

However, he also faced a hostile reception there as a group of youths pelted stones at his chopper, damaging the screen.

A number of leaders from the region have condemned the incident, calling upon the Inspector General of Police Hillary Mutyambai to investigate the matter and have the culprits arrested.

Ruto said that every politician has the right to sell their agenda in every part of the country.

“We should listen, evaluate their policies and then decide whom to support. Political violence is retrogressive, divisive, and tears down our democracy. We condemn and reject it without reservation,” Ruto said.

Uasin Gishu Governor Jackson Mandago, who Raila blamed for the attack together with Soy MP Caleb Kositany,  said that Uasin Gishu is a peaceful county.

He said they will pursue the matter until the perpetrators are all brought to book.

"We have heavily invested in peacebuilding as a region, we will not allow a few elements to take us back. I urge the security apparatus in the region to act with speed and get to the bottom of the matter. They should also be on the lookout during this charged political period," Mandago said.

“As a team that has suffered violence in Kenol, Kondele, and Embakasi East to name a few, we understand too well the dangers of glorifying and condoning violence. We must nip this barbaric behaviour in the bud and we must learn to be consistent and bipartisan in our condemnation of such evil acts,” Murkomen said.

Murkomen added that the police IG must explain why there were only two police officers in the venue.

He said protocol demands that when a person of the stature of a former Prime Minister, proper security must be provided including enough security for the helicopters.

Kanu Chairperson Gideon Moi said that as the country heads to the elections, there is a need to understand as a nation that violence has no place in Kenya's politics.

"We must condemn the heckling of Hon. Raila Odinga today in Iten, Elgeyo Marakwet and reject violence in all its manifestations."

Kositany dismissed the claims that the attack was planned.

"It wasn’t planned, just learned about it on Twitter," Kositany said.

"My mistake was to attend the burial of my long time friend Mr. Jackson Kibor."
News
1 month ago
WATCH: The latest videos from the Star
by KEVIN CHERUIYOT Online Journalist
News
01 April 2022 - 21:19