He noted that the National Defense University-Kenya, a fully chartered university, is fully up and running.

• Uhuru also urged Kenyans to work together in securing the country by strengthening national unity and observing the values of tolerance and brotherhood.

• He said the government has taken measures to facilitate the military to effectively keep the country safe and secure. 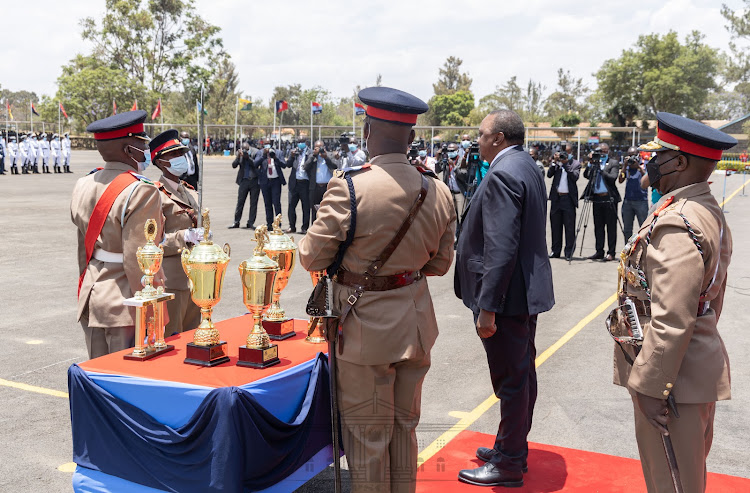 President Uhuru Kenyatta has expressed satisfaction that the government’s investment in the modernization of training has equipped the country’s security forces with adequate skills to deal with the challenges of an ever-evolving security environment.

Uhuru was speaking on Thursday at the Kenya Military Academy in Lanet, Nakuru County, where he commissioned the first cohort of graduate general service officer cadets that has undergone a one-year professional training at the academy.

He said the government has taken measures to facilitate the military to effectively keep the country safe and secure.

“We have also undertaken far-reaching reforms to support your welfare and to facilitate you to best discharge the high burden of responsibility that has been bestowed upon you,” the President said.

The Head of State further lauded the leadership of the Kenya Defence Forces (KDF) for their commitment to ensuring that the training provided to Kenyan troops adequately prepares them to operate effectively in both the contemporary and future security environments.

He noted that the National Defense University-Kenya, a fully chartered university, is fully up and running.

"And it is prepared to commence academic and professional development of the personnel across our entire security sector,” the President said.

He expressed hope that the cooperation in education and training will strengthen the cohesion of the country’s security organs and foster the multi-agency approach to operations that have proved very successful in addressing security matters.

“Today, I welcome the training of cadets from South Sudan as well as the commencement of an exchange programme of cadet training between the KDF and the defence forces of the Republic of Mozambique amongst many other existing cooperation arrangements.'

“This is the true spirit of Pan Africanism where our training experiences enhance interoperability in multi-national engagements. Fundamentally, these partnerships will foster peaceful relations within our region and beyond,” Uhuru added.

Uhuru also urged Kenyans to work together in securing the country by strengthening national unity and observing the values of tolerance and brotherhood.

“Your Excellency, this academy being a centre of excellence, provides value-based training to ensure the officers commissioned are professionally, physically, intellectually, socially and morally oriented to military life,” Ahmed said.

NPS to boost security ahead of Easter, Ramadhan celebrations

NPS appealed to the public to remain vigilant and report suspicious activities and persons.
News
10 months ago