Mudavadi appended his signature to the BBI report at the KICC.

•That was the moment when the Building Bridges Initiative officially started.

•The MPs and politicians allied with the alliance took to social media to express their happiness. 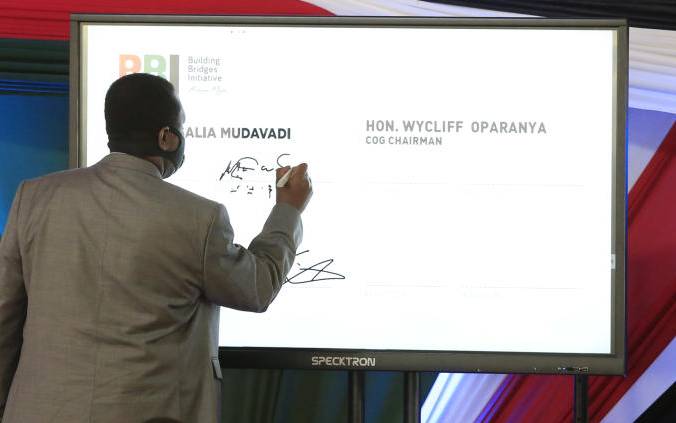 Leaders affiliated to the alliance took to social media to express satisfaction with the Supreme Court ruling.

ANC leader Musalia Mudavadi congratulated the Supreme Court judges for what he termed the bold decision, which essentially puts a stop to the BBI reggae.

"Kenya is indeed fortunate to have a strong and independent Judiciary to which the people can always turn to when those in power become outrageously impertinent," Mudavadi said in a Twitter post.

Mudavadi was among the leaders who appended their signatures at the KICC last year as the BBI proposers launch the collection of signatures.

That was the moment when the Building Bridges Initiative officially started.

The president said the BBI process was not meant to replace the 2010 Constitution.

Wiper leader Kalonzo Musyoka was also among the people who signed the bill.

Murang'a Senator Irungu Kang'ata who had even informed the president through a letter that BBI was sinking in the Mount Kenya region said that he has been vindicated.

"BBI is now dead. The bible says the Truth shall set you free."