• Ruto said that the BBI was meant to benefit the interest of a few individuals in terms of the creation of more positions in the government. 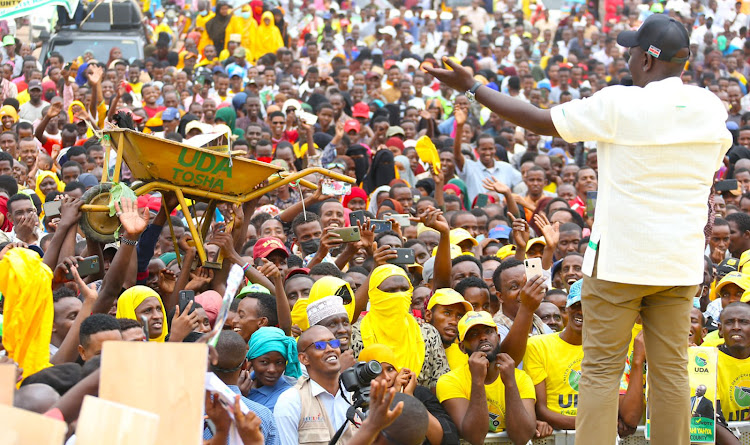 Deputy President William Ruto has welcomed the judgment of the Supreme Court on the constitutionality of the Building Bridges Initiative.

In his address on Thursday during the Kenya Kwanza Alliance campaigns in Lamu, the DP said President Uhuru Kenyatta and ODM leader Raila Odinga wasted Kenyans' precious time with the BBI.

"The Handshake brothers need to make an apology to the people of Kenya. They have wasted four good years of our time. They sabotaged the Big four agenda that was going to give jobs to our young people," Ruto said.

He continued that the BBI was meant to benefit the interest of a few individuals in terms of the creation of more positions in the government.

"Now that the Supreme Court has ruled that the BBI process was illegal, unconstitutional, null, and void. Now we want to tell them that the least we expect from the promoters of the BBI nonsense is to own up and apologise to the people of Kenya."

The DP claimed that the promoters of the bill have spent billions of public money on the unconstitutional process.

He had earlier said that the collapse of the BBI marked the end of political conmanship in Kenya.

“The end of reggae is the end of political conmanship in Kenya,” Ruto said.

The judgment, the DP said, was a win for millions of Kenyans struggling to make ends meet.

He said the judgment by the Supreme Court was a validation that the BBI was an illegal and unconstitutional exercise.

Other Kenya Kwanza Alliance leaders have also hailed the judgment of the court.

ANC leader Musalia Mudavad said that the ruling was good news to Kenyans.

"Kenya is indeed fortunate to have a strong and independent Judiciary to which the people can always turn to when those in power become outrageously impertinent," Mudavadi said in a Twitter post.

Mudavadi was among the leaders who appended their signatures at the KICC last year as the BBI proposers launch the collection of signatures.

Mudavadi appended his signature to the BBI report at the KICC.
News
10 months ago