While some politicians are leaving, those still waiting for primaries are jittery. 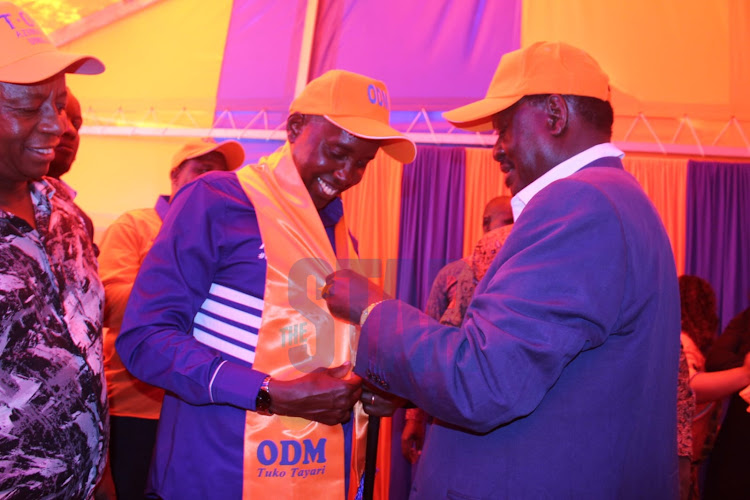 ODM leader Raila Odinga is facing an acid test in his Nyanza backyard following a growing wave of disgruntled aspirants who have ditched the party to vie as independents.

Several aspirants in ODM strongholds, especially in Nyanza region, have are jittery after it emerged that the party was already in the process of issuing direct nomination tickets.

The issuance of the tickets is based on a confidential opinion polls.

While some politicians already leaving the party and picking either independent tickets or other parties in Azimio la Umoja coalition, those still waiting for ODM primaries are shifty.

“We are still looking forward to the nomination exercise in Suna East constituency, but with these rumours of direct ticket we are not taking any chances,” Samuel Amimo, who seeks to dislodge Junet Mohammed, said.

Amimo, who started his campaigns over the weekend, said grievances in Suna East can only be solved by the people casting their votes at the national election.

Suna East has the biggest number of independent aspirants who include businessman Patrick Odipo, who came second to Junet in the last election, and former Migori county executive Elijah Odhiambo.

“In Suna East we know who will be given the party ticket. I have taken a long route of directly engaging with voters instead of going for the nominations,” Odhiambo said.

In Nyatike constituency, Odiso Ogenga who came second to the incumbent Tom Odege on an independent ticket after bungled ODM nominations has, once against, chose the independent path.

“We have plans for Migori county voters which will go past ODM primaries. These plans will see the set of time on general election,” Robert Okong’o, a governor aspirant in Migori, said.

While they are still waiting for ODM to pick a candidate, former Rongo MP Dalmas Otieno and former Migori MP John Pesa have picked Jubilee Party and DAP-K respectively.

Businessman Owiso Ngao, who is also in the race to succeed Governor Okoth Obado, will be on the August 9 ballot as an independent candidate.

In Suna West constituency, former Migori executive Valentine Ogongo who is vying for the fourth time, told the Star he chose the independent route and did not bother with ODM primaries or Azimio la Umoja coalition.

In Kisumu, former East African Community CAS Ken Obura is set to face off with Kisumu Governor Anyang’ Nyong’o in the ODM primaries as they both seek the party ticket.

The leaders said they would consolidate their support bases to field one candidate against Nyong’o, who they accuse of failing to deliver on his manifesto.

Outa, a former staunch ally of Nyong’o in the 2017 campaigns, termed the team as the redeemer of the electorate, poking holes in Nyong'o's administration.

He said they have decided to follow instructions from the party headquarters of having a consensus before making any declarations.

Outa, however, said they are fully prepared for any eventuality.

There have been talks that Nyong’o is among the party bigwigs earmarked for the ODM certificate.

Bearing in mind the newly enacted Political Parties Amendment Bill of 2021, the four said they will field another candidate to vie in the Kisumu governor race should Obura fall off at the ODM nominations slated for April.

Obura, who lost Kisumu Central MP before his state appointment, welcomed the endorsement, promising to hit the ground running in the coming week to avail his manifesto and popularise his candidature.

Outa, Ranguma and Obura both come from the Kano clan while Oloo has roots in Siaya, but was born and bred in Manyatta, Kisumu Central.

Also in their team is Nyando MP aspirant Patrick Ouya who also campaigned for Nyong'o in 2017 before they fell out.

The Kisumu gubernatorial  race had attracted five aspirants, but the consolidation of the quartet now reduces the number down to two.

In Siaya, similar realignments are taking place with disgruntled aspirants ganging up against ODM's favourites.

The duo will be facing Siaya Senator James Orengo for the county's top seat.

Party has settled on her as part of its wider plan to empower women aspirants, ensure gender equality
News
3 months ago
by STAR TEAM The Star
News
31 March 2022 - 02:03