Ruto said that Raila holds no legacy and Kenyans should not be duped to support him.

•Ruto rekindled how the ODM leader was an impediment in their bid for the top seat in both 2013 and 2017. 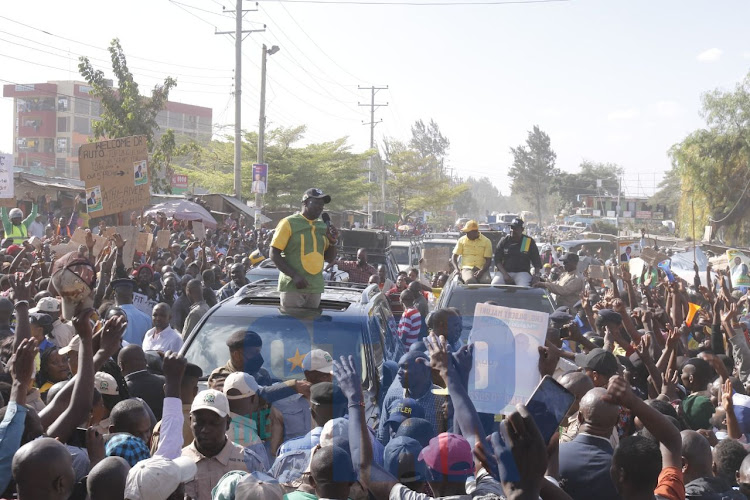 Deputy President William Ruto on Wednesday sustained his attacks on ODM boss Raila Odinga saying he has no capacity to manage the country's affairs if elected President.

The DP who took his Presidential campaigns to Wiper boss Kalonzo Musyoka's Ukambani backyard said he is the best suited to continue with the Jubilee development agenda.

The DP said the Jubilee government has done a lot for Kenyans save for the handshake that disrupted its plan.

“ This Kitendawili old man can't defeat us in August and most of us are ready to place him into a wheelbarrow and take him straight to Bondo after August,” Ruto said in Kang'undo Machakos county.

The second in command said it was ironic that the President was now supporting Raila who was by then leading anti-Uhuru campaigns across the country.

Ruto rekindled how the ODM leader was an impediment in their bid for the top seat saying he does not deserve to be backed by Uhuru for the presidency.

The DP who was accompanied by a host of MPs and politicians allied to his Kenyan Kwanza camp said Raila cannot change the fortunes of millions of Kenyans in need.

"Will the few arrogant people sitting in hotels decide for you, or you will decide on your own? " Ruto asked the crowds.

During the rallies, Ruto called upon Wiper party leader Kalonzo to join him to build the next government.

“I’m sending you to Kalonzo Musyoka; tell him we need him in the Kenya Kwanza alliance as he is set to lose in Azimio la Umoja,” Ruto said.

Ruto maintained that once elected he would continue with president Uhuru Kenyatta's legacy of improving health care, infrastructures as well as security across the Country.

He said that Raila's legacy is known and Kenyans haven’t forgotten his past actions.

Ruto further defended his track record in the Jubilee government, saying that he took part in each and every project that became a success, and thus he should be trusted to run the economy.

“I’m sure that the Kenya Kwanza alliance will form the next government and we will ensure that everyone has NHIF cover," he said.

Former Machakos Senator Johnstone Muthama assured Ruto that the people of Machakos, Kitui, and Makueni are behind him.

Muthama rallied the UDA supporters to vote for the party candidates and shame the Azimio la Umoja fronted by Raila Odinga.

“Deputy President, the people of Machakos, and other Counties will vote you together with your candidates and you should not worry,” Muthama said.

He said that already UDA party has backing across the Country and Machokos shouldn’t be exceptional.

About a month ago during a political rally in Thika, Victor Munyaka had claimed that the deputy president should forget about Kalonzo Musyoka.

He claimed that Kalonzo has no political influence in the eastern region.

Ruto to Uhuru: Don't allow State House to be theater of divisions

Ruto said State House should be used as a unifying factor.
News
10 months ago

Ruto pushes consensus, persuading some rivals to drop out but no favourites in Rift
10 months ago

Ruto: Before December, every Kenyan will have NHIF