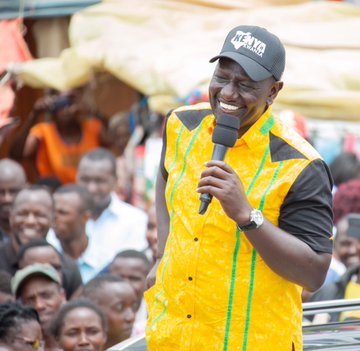 This translates to: “They have taken him in circles until recently Kalonzo himself confessed that he doesn’t know what he signed.”

On March 14, barely a day after the unveiling of Raila as the Azimio flag bearer, Kalonzo revealed that non of the more than 20 parties that joined the formation during the event were aware of the binding legal provisions in the agreement.

He said the signing process at the Kenyatta International Convention Centre (KICC) was so rushed that the legal issues were bypassed.

“There was nothing there… if I ask all those Secretary generals what they fixed their signatures to, probably nobody knows,” Kalonzo said.

Ruto said Kalonzo was not knew to the political deceit that the ODM leader is known for.

“He is the same guy without an agenda...the same guy going around with nothing to offer other than tibim and tialala,” Ruto said.

“So, you really want to tell me that this guy who has been around for all this while with nothing to show for is the guy they want to impose on us at 80 years to rule us?” Ruto posed.

“I want you people of Kangundo to put him on a wheelbarrow and transport him back to Bondo,” he added.

“So I want to send you to Kalonzo. Tell him to stop being taken round in corners and cross over to Hustler nation,” Ruto said.

The DP on Wednesday held a series of meetings and stopover rallies within Machakos and Kitui counties.

The Deputy president has intensified campaigns in areas deemed as Raila's strongholds.
News
10 months ago

Do not force Raila on Kenyans, Ruto tells Uhuru