Murathe and Tuju also claimed that Ruto wanted Uhuru out before his term ended.

•Tuju claimed the second in command plotted to sabotage Uhuru's administration and make the country ungovernable. 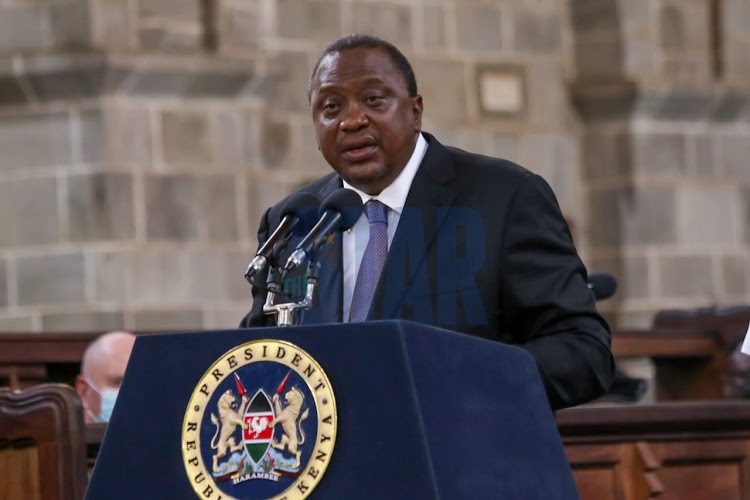 President Uhuru Kenyatta has narrated how his deputy William Ruto planned to impeach him.

According to the Standard, Uhuru says their fallout was because he found out Ruto’s plan to topple him before his term ended.

Uhuru was addressing about 3000 elders from Mount Kenya region.

The leaders were from Kiama Kia Ma, Kikuyu Council of Elders and elected leaders.

The president told them why Ruto was not good for them as the president.

According to Standard reports, Uhuru said he was tricked into taking charge of government as Ruto handled the Jubilee party.

Uhuru told the elders that when he formed the government, Ruto attempted to strike a power deal with ODM Party leader Raila Odinga.

“The president informed us that Ruto was going behind his back, planning how he could close ranks with Raila to impeach him at an appropriate time,” Mathioya MP Peter Kimari told the Standard.

Uhuru also claimed Ruto wanted Raila arrested and prosecuted after he was sworn as “peoples president” in January 2018.

During the meeting, it was also disclosed that Ruto was encouraging opposition protests in 2017 while at the same time inciting Uhuru to clamp down on them.

Tuju claimed the second in command plotted to sabotage Uhuru's administration and make the country ungovernable.

To execute his plans, Tuju said that the second in command approached ODM leader Raila Odinga long before the 2018 handshake to join forces and defeat Uhuru's agenda in Parliament.

"He was the first person to approach Raila so that they blackmail the President," Tuju said.

In January, Jubilee vice chairman David Murathe also claimed that the President ended his dalliance with William Ruto because the DP was out to sabotage his administration.

Murathe said Ruto was given half the government including some of the most powerful ministries but the President was not satisfied with the way they were being run.

The former MP said Uhuru decided to work with Raila to ensure what he wanted to deliver to Kenyans was actualised.

Ruto's spokesperson, Emmanuel Talam who spoke to the Star questioned why all these claims were not made before the 2017 elections.

"Ruto was a saint when they wanted re-election but became bad soon after! Wajinga waliisha Kenya," he told the Star on phone.

Ruto tones down attacks on Uhuru, begs him not sabotage his bid

Ruto’s tone and address to Mutomo residents were calm unlike in his previous meetings.
News
10 months ago