Martha Karua: Why Raila is the best for Kenya

Karua said she is now ready to popularize Raila across the country.

• Karua on Wednesday held a joint-press address with Raila at the Serena Hotel, Nairobi, after intense consultation on their newfound relationship going forward.

• She said her move was influenced by Raila's selflessness and history of putting the interest of the nation above any other thing. 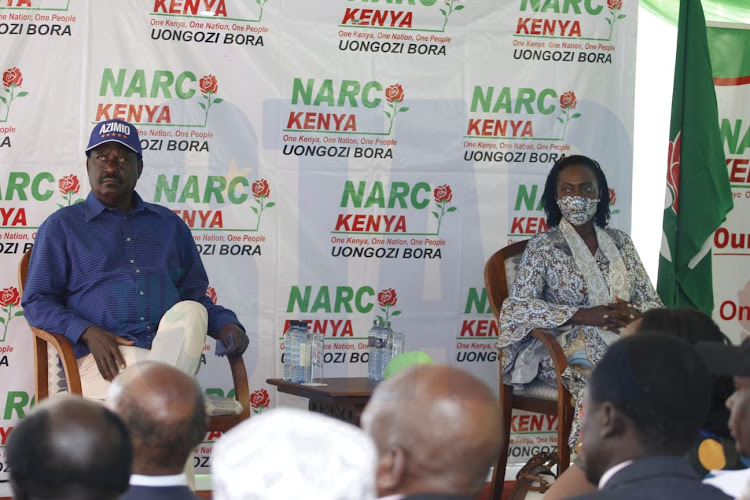 After a period of soul searching and consultation on her political direction, Narc Kenya leader Martha Karua on Wednesday pulled her weight behind ODM leader Raila Odinga's presidential bid.

Karua on Wednesday held a joint-press address with Raila at the Serena Hotel, Nairobi, after intense consultation on their newfound relationship going forward.

"I am here to confirm that from now onwards, Narc Kenya, and I are going to support the Azimio presidential candidate, Raila Odinga, and this is without any provocation," Karua said.

She said her move was influenced by Raila's selflessness and history of putting the interest of the nation above any other thing.

The party leader said that she has been keenly weighing her options on which alliance to join and she came to the realization that Raila was the best bet of all.

“All sides have people who do not believe in the rule of law, and all sides have good people. I have been looking keenly and I have been able without much struggle to identify a critical mass of goo people within the Azimio coalition. And that is all that is needed for the liberation in this country,” Karua said.

She added that they are now able to forge forward for the best interest of the people of Kenya.

Also, Karua said that the party is now more ready to move across the country to popularise the Azimio flag bearer.

According to Narc Kenya, they have agreed on the social-justice ideal that they stand for.

We must look at leaders who can fulfill promises, it is easy to make campaign promises but it requires people of integrity to fulfill them," she said. "When we had disagreements we have laid them on the table and overcome them in the best interest of the people."

Karua has been billed as a potential running mate of the top presidential contenders.
News
2 months ago

Ruto-Karua ticket to save Kenya from dynasty domination- Moses Kuria