Safina set to endorse Wanjigi as its presidential candidate

Ruto, Musalia and Wetang'ula are among guests expected at the event.

•Wanjigi will use the occasion to share his vision for the country.

•The businessman ditched ODM to join Safina two weeks ago. 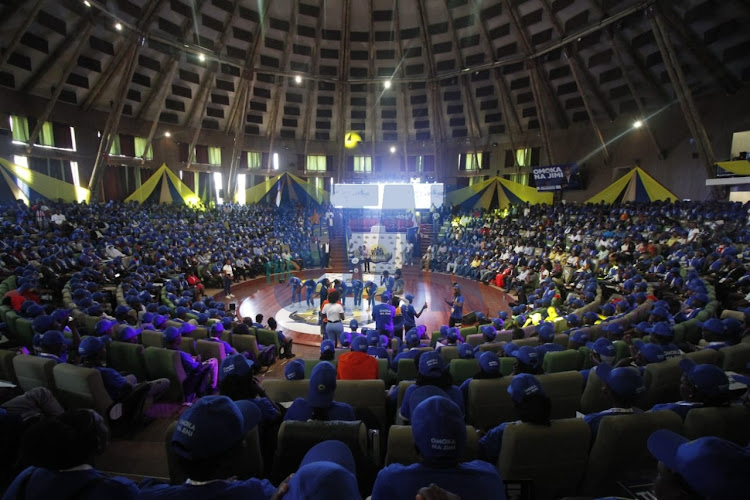 Safina Party guests at the Bomas of Kenya ahead of the party NDC that will endorse Jimi Wanjigi as it's presidential flag bearer.
Image: Enos Teche

At least 2,000 delegates have been in a meeting at Bomas of Kenya since 10 am as invited guests trooped in for Wanjigi's big day at a separate facility within the venue.

Wanjigi will use the occasion to share his vision for the country.

During UDA's NDC on March 15, Wanjigi publicly invited Ruto and his brigade to his meeting.

The Kenya Kwanza team is also expected to hold a public rally in Athi River, Machakos county, later in the day.

The businessman ditched ODM to join Safina two weeks ago.

Wanjigi stated that he has not given up on being Kenya’s next president and he will do that under the Safina party.

Wanjigi claimed that his exit from the ODM party was due to the violence subjected to him during the party’s National Delegates Congress(NDC) at Kasarani stadium.

"I resigned from ODM after the brutal violence I experienced at Kasarani during the ODM National Delegates Conference. Raila made it practically impossible for the Party to hold free, democratic and credible Presidential nominations," he said.

The businessman accused the ODM leader of working with President Uhuru Kenyatta to stop his journey to the presidency.

Over 2,000 delegates expected to attend the event.
News
10 months ago