KCSE enters week 2 as state clamps down on cheating 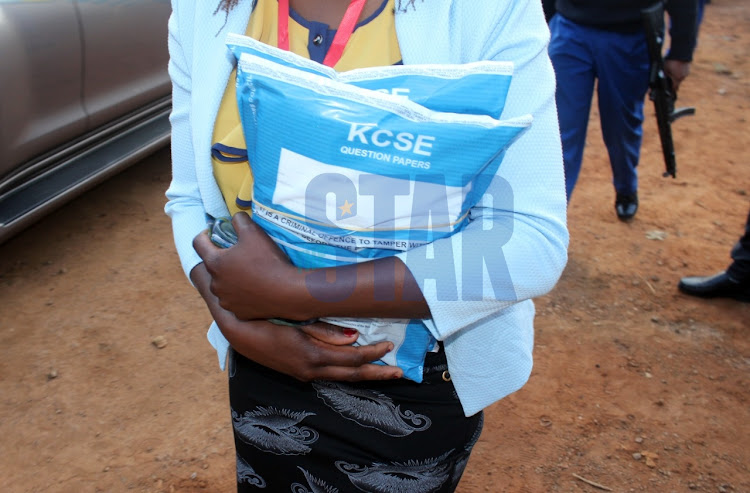 Three people have been arrested for aiding cheating of the KCSE exams in Kericho.

The three; two chemistry teachers and a lab technician are helping police with investigations and are expected in court.

They were arrested on Friday after being found in possession of mobile phones containing this year's Chemistry practical paper.

The teachers were identified as Leonard Korir, 28, and Collins Yegon Cheruiyot, 27. The lab technician is Erick Kiplangat, 30.

Education CS George Magoha said he had allowed two students found with mobile phones on day one of the test to continue with the exam.

He however said anyone found aiding or cheating will carry their own cross.

“Those who have attempted to breach the sanctity of our examinations, we have arrested them. They will face the full force of the law and have themselves to blame,” Magoha said at Alliance High School on Friday.

In Nairobi, a student at Eastleigh High School was sending questions to somebody in Kisii, a teacher at Sir Newton High School had photos of exams.

The CS also said a teacher was arrested in Garissa while taking an exam paper to her office on Monday at Airport View Secondary School while a center manager was also arrested for taking photos of the exam.

On Friday, 42 students at Dibuoro Secondary School in Siaya were arrested and detained.

The students were in possession of mobile phones which had contents of the Chemistry Practical and Swahili Paper.

Police said the phones had a Whatsapp group that was used for communication among the students.

At least 63 KCSE candidates and a supervisor were arrested in the Kakuma refugee camp over suspected exam malpractices.

An invigilator, supervisor, centre manager and police officer at Ngungi Secondary School in Mbooni were also arrested on Thursday over breach of regulations.

Candidates are set to begin their second week of KCSE on Monday.

The students will sit Mathematics PP2 and Biology PP1 before tackling Kiswahili PP3 and Religious Education PP1 on Tuesday.

KNEC detectives launched investigations a week ago.
News
8 months ago

KDF deployed in Lamu to strengthen security during KCSE

Regional commissioner says they are using multi-agency teams to ensure safety of exams and personnel.
News
8 months ago