Xue Bing says the Horn of Africa has suffered from external interventions from western countries for long.

• Ambassador Xue says peace conference, which Kenya and Ethiopia have offered to host, will offer a platform for regional countries to peacefully settle differences.

• Xue was in Nairobi for his tour of the Horn, which took him to Eritrea, Ethiopia, Djibouti, Somalia, Uganda and South Sudan. 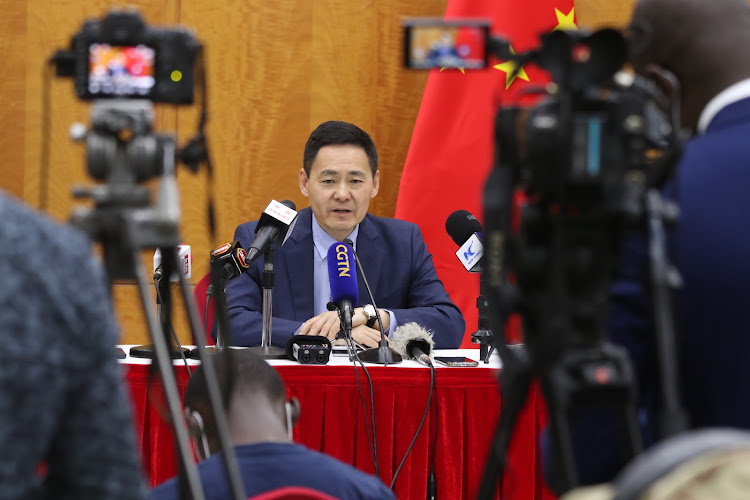 China Special Envoy for the Horn of Africa Ambassador Xue Bing during a press briefing at the Chinese Embassy, Nairobi, on Saturday, March 19, 2022
Image: WILFRED NYANGARESI

Horn of Africa countries are fed up with western countries' interference, China’s first special envoy to the region has said.

Announcing China will hold the first peace conference in the first half of the year, Ambassador Xue Bing on Saturday said the Horn of Africa has suffered from external interventions from western countries for long.

“Some countries in this area [the Horn of Africa] are fed up with the foreign intervention, the preaching from Western countries. They say China respects us, treats us as equals and so they want to see China playing more active ands constructive role".

"We thus have to answer the call from our friends here,” he said at a press briefing at the Embassy of China in Nairobi.

Xue was in Nairobi for his tour of the Horn, which by Saturday had also taken him to Eritrea, Ethiopia, Djibouti and Somalia. He is was to tour Uganda and South Sudan.

What I get during my discussion with leaders from this region, he said, is they want to resolve their own differences without interference.

“Some western countries come here and tell you what and how to do it. From our discussions, I have a feeling countries are fed up with that," he said.

The envoy also informed that since his appointment, some Western countries have contacted their foreign ministry through their embassies in Beijing seeking a meeting with him.

"I have said I’d first have to travel to the region and we could have a meeting later,” he told the media.

Ambassador Xue said the peace conference, which Kenya and Ethiopia have offered to host, will offer a platform for the countries in the region to peacefully settle their differences.

In February, China announced the appointment of the experienced senior diplomat as its special envoy to the turbulent region.

The region is facing instability with the Tigray war in Ethiopia, the delayed elections in Somalia, the dragging in the implementation of the South Sudan peace deal and the political crisis in Sudan following the coup and resignation of Prime Minister Abdalla Hamdok.

In April 2021, the United States appointed Ambassador Jeffrey Feltman as its special envoy to the Horn of Africa. He was succeeded by Ambassador David Satterfield in January this year.

Announcing the new appointment, Secretary of State Antony Blinken said they had interned Feltman’s tour of duty to be for less than a year.

“However, the ongoing instability in the Horn of Africa and the region’s interlinked political, security, and humanitarian challenges demand sustained focus by the United States,” he said.

Blinked added that Ambassador Satterfield’s decades of diplomatic experience and work amidst some of the world’s most challenging conflicts will be instrumental in America’s continued effort to promote a peaceful Horn of Africa and to advance US interests in the region.

Xue said being the first time China is appointing a special envoy to the region, it is a demonstration of the seriousness with which the country’s Foreign Affairs ministry takes the region.

“The Horn of Africa region is home to countries that have traditional relations with China. We are strategic partners. This area is strategically located and abundant in resources. The potential of development is huge”.

“ At the same time, there are issues of peace and security like differences over boundaries, ethnic and religious conflicts. So, peace and security is important and that is why China put forward the proposal for peace and development in the Horn of Africa,” he said.

From the initial response, he said, the regional countries are all "very positive" and have welcomed the Chinese proposal.

Asked what his appointment means to China’s non-intervention principle Ambassador Xue said distinctive feature of the proposal is non-interference in internal affairs or regional countries and “African Solutions to African Problems” mantra.

During the tour, he said, he met with the presidents, prime ministers and Foreign ministers in the region.

In Kenya, he met Foreign Affairs PS Macharia Kamau, who welcomed China's move to appoint a special envoy to the Horn of Africa.

Kamau, according to the ministry, said the initiative is timely, as it will add impetus to the efforts by various partners to find lasting solutions to the peace and security threats in the region.

Asked whether his appointment is a reaction to the US naming of its own special envoy, Ambassador Xue said that is a creation of some Western media, who “tend to look at the Chine appointment of a Horn of Africa envoy from the perspective of geopolitics, major powers competition”.

“This is not Chinese intention. As I said clearly, China’s intention is to provide a platform for regional countries to come together and resolve their differences independently through peaceful negotiations and consultations,” he said.

“Although it is a Chinese proposal the countries in the region are the main players. China will play its role from the background”.

In an exclusive interview, China envoy defends lending, saying no country has fallen into “debt trap” because of their loans
Siasa
5 months ago
WATCH: The latest news from across Africa
by ELIUD KIBII Subeditor and writer
News
20 March 2022 - 22:00