Raila men vow to lock Ruto out of Nairobi 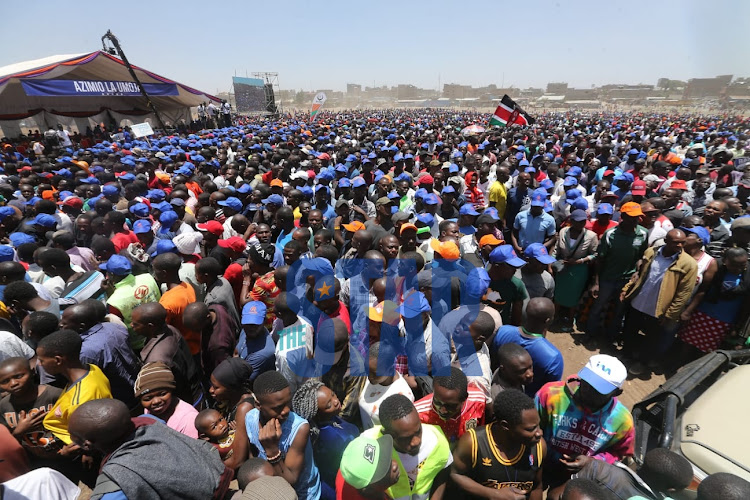 Azimio la Umoja leaders have lined up a series of campaign rallies across the 17 Nairobi constituencies, vowing to lock out Deputy President William Ruto.

The rallies happening in the absence Raila Odinga are spearheaded by a combined force of ODM and Jubilee leadership.

Since Wednesday, the team has been traversing the counties drumming up support for Raila even as they take an aim at Ruto who they described as unfit for the top job.

On Thursday, the team took their campaigns to Dagoretti South and Westlands after staging similar rallies in Langata and Dagoretti North on Wednesday.

At the centre of the battle is nearly three million votes in Nairobi.

According to the Independent Electoral and Boundaries Commission 2017 data, Nairobi had 2.3 million voters registered in its 3,378 polling stations.

This numbers went up by 139,560 new voters last year after an enhanced national voter listing exercise by the poll agency.

Going by past voting patterns, the DP is yet to expressly claim a share of the city vote which has been under the grip of President Uhuru Kenyatta and Raila.

Speaking during a rally in Dagoreti South, ODM secretary general Edwin Sifuna said Azimio will win majority of seats in the capital.

The Nairobi senate aspirant said ODM and Jubilee will work as a team to deliver Nairobi in the August polls.

“They thought ODM and Jubilee could not walk together, they have been proved wrong. We will work with Jubilee to deliver in Nairobi,” Sifuna said.

“Ruto should know that Nairobi belongs to Raila and Uhuru, there is no space for him,” Makadara MP George Aladwa said.

Nominated MP Maina Kamanda said Nairobi will go for Azimio in the forthcoming polls, ruling out any infiltration by Kenya Kwanza.

“Raila has been the Langata MP and knows the problems of the city, he stands a better chance to address the many problems," Kamanda said.

The team will on Friday camp in Starehe and Kamkunji with rallies at Gikomba-Ziwani stage and the historic Kamukunji grounds.

On Saturday, the Azimio team will be at Embakasi West, Embakasi South and Makadara, the following day they have lined up rallies in Ruaraka, Embakasi North and Mathare.

According to the schedule shared with the media, the team will finalise the six-day campaigns with mega rallies in Royasambu, Kasarani and Embakasi Central.

How Tuju entry could change dynamics in Azimio line-up

Raila: Uhuru best placed to be my advisor after polls

He says other options for the President when he retires includes international duty.
News
3 months ago