The family will no longer engage in court battles because he had asked them to resolve all issues amicably.

• Last year, he sought forgiveness from those he has wronged, especially within his family.

• He also forgave those who had wronged him. 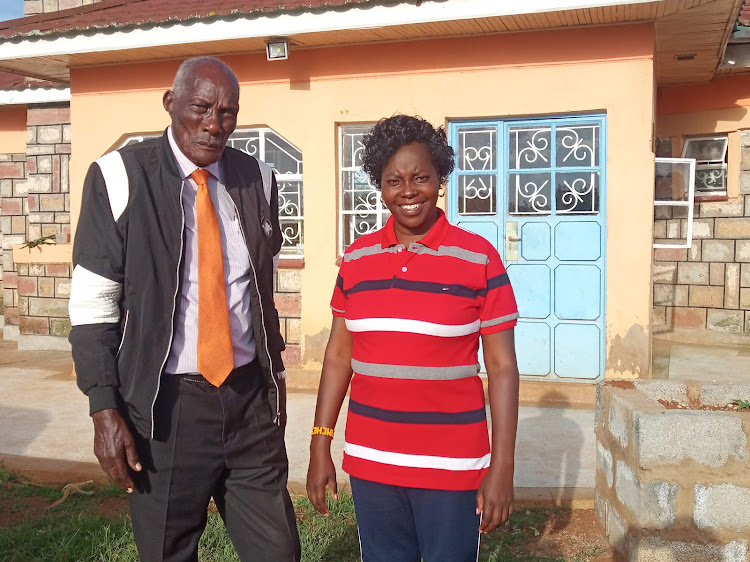 Jackson Kibor with his youngest wife Yunita at their Kabenes home in Uasin Gishu in 2022
Image: BY MATHEWS NDANYI

Jackson Kibor was ready for death. Last year, he sought forgiveness from those he has wronged, especially within his family.

He also forgave those who had wronged him. He was baptised at a ceremony in Eldoret presided over by Retired Bishop of the AIC Church Silas Yego.

His son Phillip said on Thursday his father was a tough man but he knew he was old and his end was near as his health was not good.

"One has to seek salvation when you know the time to go is near and Mzee did that," he said.

Before his death, he said he wanted to be buried next to his first wife Ether who died three decades ago.

His wish was also in line with the Kalenjin community traditions.

The family revealed that Kibor shared out his wealth among all his children. He has 26 children, including 16 sons.

Each son got 200 acres and the daughters got 100 acres each.

Each of them also got a tractor to stand on their own.

Phillip described his father a "frenemy" with whom they disagreed in ideologies but at the end they would sit and talk.

He said the family will no longer engage in court battles because his father had asked them to resolve all issues amicably.

"We had court cases for seven years which he won at the end because his main issue was that he wanted us to know it was his wealth. After he won the case, we met and agreed on everything," Phillip said.

"You will not see us in court again because we will resolve everything reasonably."

The home where Kibor will be laid to rest is in Kabenes near Ziwa market in Uasin Gishu county.

On Thursday, his children, led by Loyce and Phillip, said the family had lost its patriarch but he had lived a full life and achieved many firsts.

“He was the chairman of all men and we are saddened that he has left a big void that will be difficult to fill up. However, we do not fear that he has gone because he left a rich legacy for us to emulate,” Phillip said.

“In matters of love and other issues, I have lifetime experiences which I had to share with the young men," he said.

He had four wives, one of whom is deceased.

Kibor’s home is located on one of his large farms measuring more than 2,800 acres. It was a hive of activities on Thursday as Kenyans flocked in to mourn with the family.

Soy MP Caleb Kostany was among those who condoled the family. He said they have started burial arrangements.

“We have left it to the family to consult among themselves and then give us the date they want Mzee to be rested,” Kostany said.

Rael Chebichi, a member of the family who is vying for the Uasin Gishu Woman Rep seat, said they were grateful to God for Kibor's life.

Other leaders from the region, led by Uasin Gishu Governor Jackson Mandago and Deputy Governor Daniel Chemno sent their condolences to the family.

Kibor died at St Luke’s hospital on Wednesday and his body was moved to the Eldoret Hospital.

His life was full of controversy both at family and public level.

In an exclusive interview with the Star two years ago, Kibor said he was ready to die after living the best life he could, tumultuous and satisfying. He said he had seen it all, done it all.

“I have done all that I could and in the best way possible. I guess no one can say I am a bad person and when God takes me away any time I will have no regrets," Kibor said.

In politics, Kibor was a man of principle-once daring to ask former President Daniel Moi to name and groom a successor. That time in 1992 it was impossible for anyone to imagine Moi’s exit from power.

The then Uasin Gishu Kanu leader was arrested, taken to State House and forced to kneel and apologise.

Moi and Kibor later made up at a meeting that was organised by the then Kanu power man Mark Too.

Kibor was born in Lelmokwo, Nandi county, to very poor parents. He was orphaned after his parents died when he was barely age five.

He dropped out of school in 1957 in Class 5 because he could not pay Sh1.50 per year to continue. He was a herds boy, farmhand and driver.

In 2020, he was worth more than Sh6 billion, mainly from vast farms in Rift Valley covering more than 4,500 acres. He had real estate and prime plots in Eldoret, Kapsabet and Nairobi and luxury cars.

He was the only 'farmer' who imported six Mercedes-Benz S and C class cars, among other top-of-the-range vehicles.

Kibor was a staunch AIC follower and had given land to more than eight churches and a mosque. He bought more than 45 acres to construct Kipkabus Secondary School.

Kibor made headlines with his long, salacious and successful divorces against his second and third wives.

After 52 years of marriage, an Eldoret court granted him a divorce from his second wife Josphine Jepkoech in October 2017.

On October 18, he was granted a divorce from Naomi Jeptoo, his third wife.

But he married his fourth wife, Yunita Kibor, who was less than half his age. The marriage was criticised by elders and those he called "Kibor-haters" but he ignored them.

“Yunita has taken good care of me in my sunset years and I don’t regret my decision. She made me feel younger and more energetic," Kibor said then.

His family confirmed that he died last night at St Luke's hospital in Eldoret.
News
6 months ago

Kibor's body moved to morgue as family meets at his home

Life and times of Jackson Kibor

He was once arrested, taken to State House and forced to kneel and apologise.
News
6 months ago