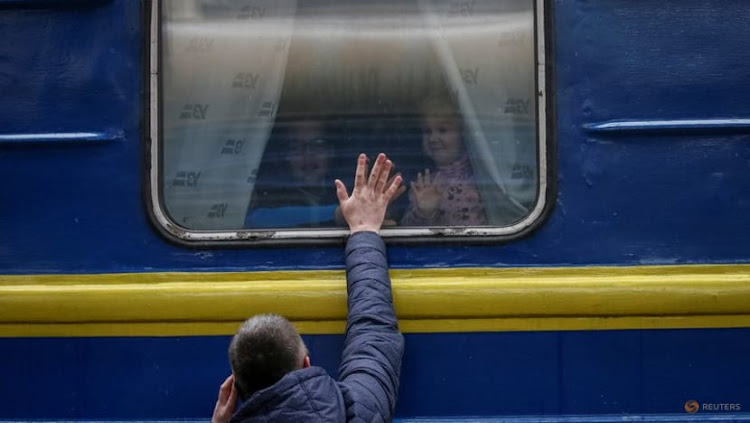 Children look out from an evacuation train from Kyiv to Lviv as they say goodbye to their father at Kyiv central train station in central Kyiv, Ukraine, Mar 3, 2022.
Image: REUTERS

Mariana Zlahodniuk spent days trying to persuade her mother, Olena, to get out of Ukraine.

"She wouldn't come, was adamant in fact," says Mariana, a 27-year-old marketing and business adviser from Ukraine, based in the Polish capital since 2012.

The pair's hometown of Zhmerinka, in central-southern Ukraine, is a strategic railway point and the frontline of the Russian invasion is edging closer.

Mariana's phone calls became more desperate, until, finally, Olena decided to make the hazardous journey to cross the border to safety in Poland.

Olena's mother, Mariana's 73-year-old grandmother, meanwhile, is left in their house in the small town. "She calls me every day and tells me to come home and tend to the garden," Olena adds.

Mariana eventually picked up her mum on the Polish side of the border on 26 February after a complicated journey - half of it on a slow train to Lviv with the lights turned off - to avoid attracting attention from the Russian military forces.

"I will go home as soon as I can and will do what I can to help, for example cooking for the soldiers," Olena says, when we meet in a cafe in Warsaw. "I will have to hide her passport," Mariana laughs.

Support at the border

When she arrived to collect her mother, Mariana says she was immediately struck by the lack of food and help available for the stream of refugees crossing at the border town of Korczowa and decided to act.

After phoning round her friends in the marketing and business community, she was quickly overwhelmed by offers of help.

She joined forces with an Afghan refugee-turned-restaurant owner, Harry Parwani, a friend from Krakow. His catering company, Vegan Ramen AF, has stepped in with its portable kitchen to help provide free food for up to 8,000 people a day at the border.

Mariana now employs 20 people as cooks and helpers, providing transportation and running a hotel. Shifts rotate every three to four days as the work is gruelling and some refuse to be paid, she says.

"Bakers sell me bread below market prices, firms bring in the food for free, companies offer free transportation and drivers. It's an extraordinary effort."

'We want to provide support at all stages'

"We will help as long as it will be required," says Krzysztof Inglot, founder of Poland's largest recruitment firm, Personnel Service.

"We know that refugees at different stages of their stay in Poland will need different support. At the beginning, it is mostly transport, accommodation, and psychological support. The next stage is settling down, finding work and integration with Polish society. We want to provide support at all these stages," he says.

Polish businesses have mobilised quickly to help refugees, while Maciej Panek, chief executive of vehicle hire firm Panek has donated 1,000 rental cars to transport people away from the border.

Helping the refugees sort out their finances will also become an important part of support - banks in Poland have already removed fees for money transfers to Ukraine and commissions for cash deposits and ATM withdrawals.

Mr Inglot is optimistic, he says his recruitment company data suggests the labour market in Poland could absorb 500,000 employees within the next six months and another 200,000 after that, due to an acute shortage of workers in many sectors.

"We estimate that about 30% have travelled to other countries, so can say about half a million people may want to join the labour market. That is good news for employers who need employees," he says.

Michael Dembinski, chief adviser to the British Polish Chamber of Commerce (BPCC), agrees. "Our members have been held back by a lack of workers in Poland." He describes an outflow of men from sectors such as construction, logistics and IT, but is hopeful hospitality, retail, the care sector, agriculture and horticulture will now gain more staff.

This rapid response has not been limited to the biggest companies: smaller firms are also pitching in. HerImpact, a recruitment agency in Warsaw, is working for free to help women arriving from Ukraine create new CVs, apply for jobs and translate documents into Polish and English, says chief brand officer Dionizy Wincenty Placzkowski.

"Many Poles have opened their hearts and houses to provide support to people in need," says Agata Zeman, managing director of the 24/7 media agency in Warsaw. The agency has donated part of its office to Flying Bag Foundation which is helping refugees, especially teenagers, organise their lives in Warsaw. "I am proud of our people, who from the first minute, were united in solidarity and support for Ukraine. Like many other firms, we have given our team time to volunteer."

A Polish foundation that connects IT companies with non-governmental organisations - TechForUkraine - was launched the day before Russia's invasion and within two weeks had 450 firms signed up and 30 projects launched.

"IT companies have these 'superpowers' and want to use them for good," says Jacek Siadkowski, director of TechForUkraine. "Young people coming into the sector in Poland often work on strategies for selling sausages or something, and this campaign really galvanised them."

Mr Siadkowski says TechForUkraine is working on an "Airbnb-style" web platform, to help Ukrainians find accommodation. He says the platform called, uaSOS.org, is being created by a coalition of firms including The Boston Consulting Group, Amazon Cloud Services, Orange and Salesforce.

Ties between UK and Poland

Mr Dembicki says many of the BPCC's members - one third are large UK-based businesses investing in Poland - have pledged some kind of support, some financial. He says many of the UK's 52 chambers of commerce also want to help, offering English language lessons online.

"As soon as we heard about the war in Ukraine, I asked friends to start a collection of humanitarian aid, so together with Katarzyna Mazurkiewicz and volunteers we organised it," says Irina Nowosielska from the Polish British Social Integration Club, Wawel, a charity based in West London.

"There are a lot of good people around. It's just unbelievable how many people help us to help Ukraine," Ms Nowosielska says.

Back in Warsaw however, Olena Zlahodniuk, is already itching to go home. "I am extremely grateful to the Polish people for helping, but this is our fight and we will win," she says.