The DP spoke on Thursday at a meeting with Kenya Private Sector Alliance (KEPSA).

• Ruto said candidates should respect the independent institutions and if they have doubts, they proceed to court.

• He said the country needs to make elections to be about choosing right people who can help in the transformation of the country. 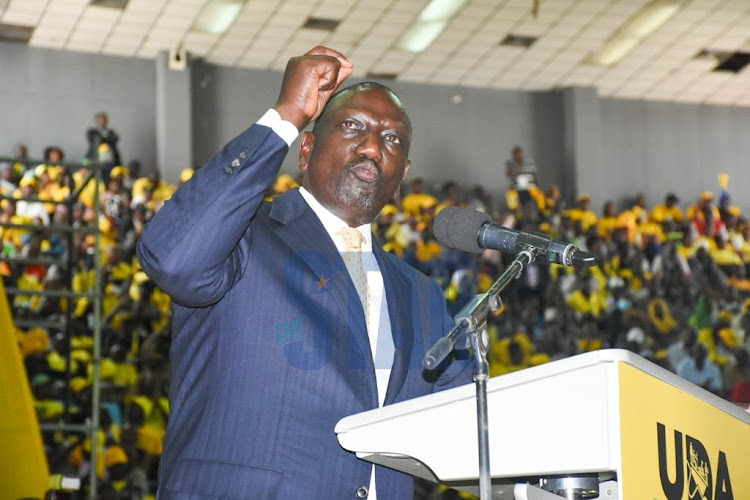 Deputy President William Ruto has yet again said he will accept the outcome of the August 9, elections whichever way it will go.

Ruto also challenged his competitors to publicly declare their stand on the outcome of the elections, adding that the ODM leader Raila Odinga is sceptical of the outcome.

“We are committed to respecting the outcome of the elections and the decision of the people of Kenya unequivocally, and without conditions," he said.

"I wish our competitors can do the same. They have never done that in the past, and they are yet to do it. I have listened to them carefully...they say they will accept the results if, and when you say if, in whose judgment?"

The DP spoke on Thursday at a meeting with Kenya Private Sector Alliance (KEPSA) at the Villa Rosa Kempinski, Nairobi.

The DP asked the presidential aspirants to respect the independent institutions and if they have doubts, they should take the matter to the court.

“I am giving you my commitment here unequivocably, publicly, that I will accept the outcome of the election whichever ways it goes because elections are not a matter of life and death.”

He said the country needs to make elections to be about choosing the people who can help us to deliver in the transformation of the country.

The DP’s remarks come a day after Raila, who is the Azimio la Umoja Movement presidential candidate said during his address at the Chatham House in the UK that he will only accept the outcome of free and fair elections.

Raila said his team has already raised its concerns with the IEBC on the key matters that need to be addressed to ensure the elections are free and fair.

At the same time, the DP explained to KEPSA his agenda of the Bottom-Up Approach, saying that it is about how to capitalise on the private sector.

On his side, Mudavadi said that the Kenya Kwanza Alliance government will create an economy that works for all people.

"We want an economy that works for all. In this dialogue, we are not trying to create divisions between the cadres of our economic players. We want to create a synergy that will see us work together as Kenyans," Mudavadi said.

I will accept outcome of free, fair poll - Raila declares

Raila made the declaration while addressing the Chatham House.
News
2 months ago

Raila: We've put measures to ensure our votes are not stolen

The ODM leader said he has raised issues of concerns to the IEBC to weed out malpractice.
News
2 months ago
“WATCH: The latest videos from the Star”
by KEVIN CHERUIYOT Online Journalist
News
17 March 2022 - 23:11