Kenyan Orthodox Church, which is aligned to the Greek Church, supported Ukraine

•One priest told the Star, the sanction removing Russia from  SWIFT, the global money transfer system. has made it difficult to get their salaries and other benefits.

• Slowly, some are returning to the mother church. 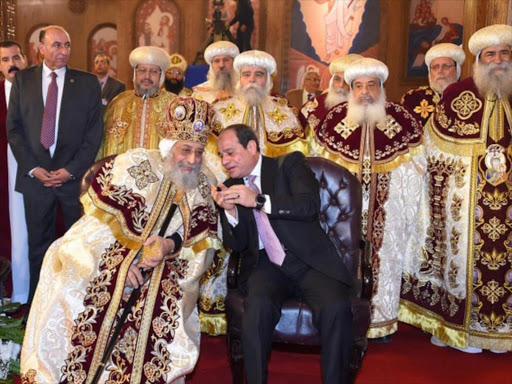 Egyptian Coptic Pope Tawadros II, Pope of the Coptic Orthodox Church of Alexandria and Patriarch of Saint Marc Episcopate, receives Egyptian President Abdel Fattah al-Sisi at the new Coptic Cathedral, the The Nativity of Christ, in the new administrative capital, 45km east of Cairo on January 6, 2018

Some Kenyan priests with the Greek-aligned Orthodox church rebelled and sided with the Russian Orthodox Church because it promised them lots of money and benefits.

Some are regretting their decision. And a few are gradually returning to the mother church in Kenya.

Now that Russia is no longer part of the SWIFT global money transfer system, those golden promises of salaries and benefits cannot be realised. Sanctions are hurting Russia's drive to control the church in Kenya.

The senior leadership says they are welcomed back with forgiveness and benevolence, and not sanctioned. They left because of money, not theology.

As long as Russia's war against Ukraine rages, the SWIFT system won't improve their lives.

Since 2019, 60 priests in the Kenyan (Greek) Orthodox Church rebelled against the church's head and followed a delegation of preachers from the Russian church seeking to establish a parallel system.

Sources in the church indicate the Russian priests offered the priests handsome salaries and financial benefits, cars and scholarships for them and their children to study abroad.

But the sanctions against Russia for its invasion of neighbouring Ukraine has meant those promises are not forthcoming.

Fr Simion Kinyanjui, one of the Kenyan church’s priests based in Gigil, has admitted he was aligned with the Russians.

The Kenyan church has sided with the Ukrainians.

There is little or no doctrinal difference between the two Eastern Orthodox churches.

“We are human beings. [If] you are working where you are not well paid, you will definitely join the company that pays you well,” Kinyanjui told the Star. He explained one of the grievances of the rebel priests.

The Rev Evangelos Thiani who is a senior lecturer at the Orthodox Patriarchal Seminary, said the renegade priests are returning to the Kenyan mainstream.

It's about the money and Kenyan priests have long complained their welfare was ignored.

Bishop Neofitos Kong’ai who is aligned with the mainstream led by Archbishop Makarios Tillyrides told the Star the mutinous priests were given fulsome promises.

“Nothing is coming to and so some are getting back to us slowly. We are suffering because the SWIFT is not working any more,” he said.

“Some are realising  they made a mistake and are coming back [to the fold,” the senior bishop said.

He said the renegade priests have remained in the church. Some, however, leave the church and start their own houses of worship.

Problems in the Orthodox church started when the African church, which is headquartered in Egypt, supported the clamour for the  Ukrainian church be independent from the Russian Orthodox church in Moscow.

Moscow had wanted to have the Ukrainian assembly be under it. A section of disgruntled Kenyan priests in 2019 secretly wrote to the Russian church, inviting it to take over the one in Kenya.

Thiani said the decision of the Russian clerics to lure the Kenyan priests to attempt to take over the church was a way of getting back at them and it escalated due to the war.

"Of course, the war has a big part to play in the wrangles because the current [virtual] head of the Russian church was a former KGB agent [President Vladimir Putin]."

"It is political because Moscow wants to conquer Ukraine. They are against anybody who seem to stand on their way," the theologian said.

Russia, Ukraine are Orthodox but war splits Kenyan priests, rebels side with Russia
News
2 months ago

I am honoured to be the new Ukraine Ambassador to Kenya. I have been a career diplomat for more than 25 years, serving in four missions and in the ...
Siasa
3 years ago
“WATCH: The latest videos from the Star”
by GORDON OSEN News Journalist
News
16 March 2022 - 23:00