Raila: We've put measures to ensure our votes are not stolen

The ODM leader said he has raised issues of concerns to the IEBC to weed out malpractice.

• Raila said even after the much-disputed 2007 presidential results, the outcomes of the last polls have not been that pleasant.

• He said that the 2007 elections were botched and as a result, some Kenyans paid a heavy price after they lost their lives. 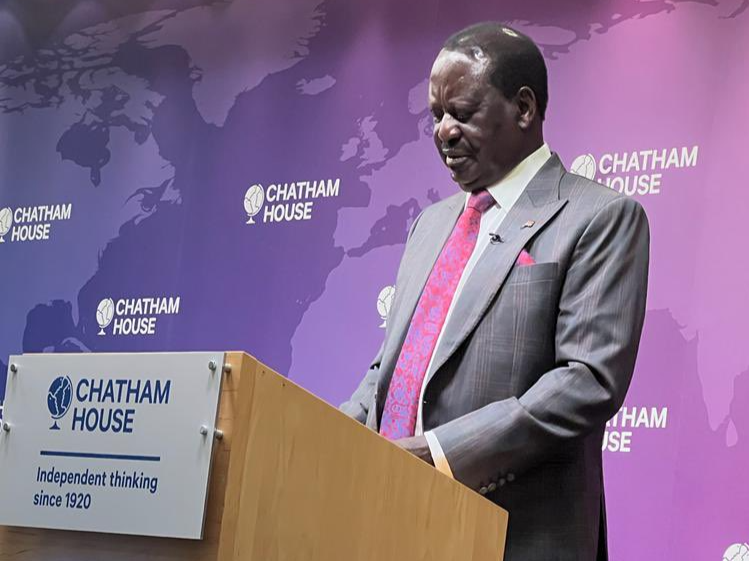 Raila Odinga during the Chatham House address in the UK on Wednesday,March 16, 2022.
Image: PAULINE NJOROGE/TWITTER

ODM leader Raila Odinga has assured his supporters that his votes in the August 9, polls will not be stolen.

Speaking at Chatham House in the UK on Wednesday, Raila said he has raised his concerns to the IEBC on areas that need to be addressed to ensure that his votes and that of other candidates are secured.

He said that as a team, they are also prepared to protect their votes against any malpractice.

“We are monitoring the electoral commission, and we have actually pointed out areas of our concern to ensure that the process is free and fair.”

He revisited the 2007 elections saying the polls were botched leading to some Kenyans paying a heavy price after they lost their lives.

Raila said that even after the much-disputed 2007 presidential results, the outcome of the last polls have not been that pleasant.

At the same address, Raila weighed in on the rising public debt.

He said that he will put in place measures to ensure that the public debt is mitigated from rising.

Speaking on the issues of Russia's invasion of Ukraine, Raila said that the United Nations needs to urgently take leadership in finding a solution through diplomacy and dialogue already initiated in recent discussions in the Security Council.

He added that since the invasion, Kenya might lose Sh10 billion worth of exports to Russia as a result of sanctions.

"We in Kenya know too well the cost of war as a result of the conflicts in our neighboring countries. Our intervention in Somalia, necessary as it is, has been very expensive to us."

He says if elected he will sure country does not default on payment.
News
2 months ago

Regions where Ruto is ahead of Raila

The DP is gaining ground in Western Kenya where Raila has been winning.
News
2 months ago
WATCH: The latest videos from the Star
by KEVIN CHERUIYOT Online Journalist
News
16 March 2022 - 19:46