Protests as police detain over 2,000 motorcycles after suspension of crackdown 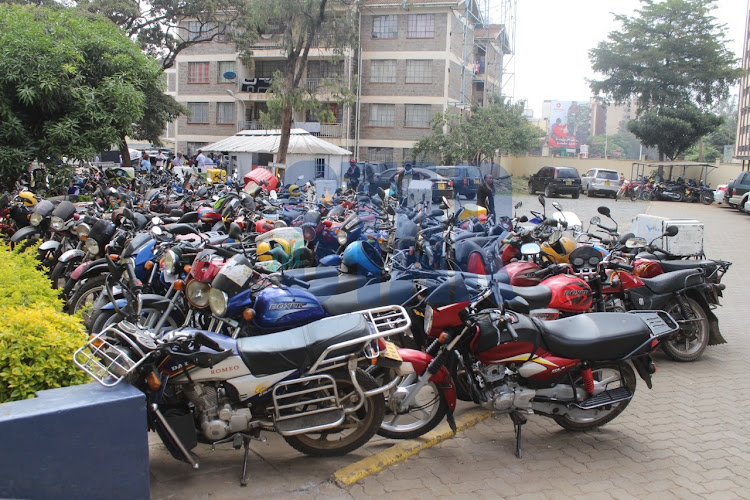 Several bodaboda riders have protested the continued detention of their motorcycles by police even after a crackdown on them was suspended.

This is despite the fact that a crackdown that had been launched was suspended. Police say the riders are now required to produce a raft of documents before they get back their motorcycles.

The riders have protested the continued detention of the motorcycles, saying some of them were on loans.

“I was arrested and charged in court and fined Sh15,000 but the police have refused to release the motorcycle because they say they are waiting for a direction from their bosses,” said a rider who had been camping outside Kilimani police station.

In most police stations in the country, the situation is the same as the yards are full of motorcycles, which are increasingly gathering dust.

According to police, among the documents the operators whose motorbikes had been impounded are supposed to produce are driving licences, insurance cover, logbooks and reflector jackets.

Head of traffic in Nairobi Joshua Omukata said the crackdown did not include the unconditional release of the motorbikes.

“They must fulfil these conditions before they collect their motorbikes. Those without the requisite documents will have to look for them before they can be allowed to pick their motorcycles,” said Omukata.

Omukata said the operators must also show proof of membership to either a Sacco or an association.

“We are trying to encourage them to be members of associations or Saccos for easier identification. They should respect all the traffic laws and adhere to them in their operations.”

The government launched a crackdown on the riders days after a video emerged showing a female driver being sexually molested along Wangari Maathai Road after an accident.

At least 17 suspects who are believed to have participated in the assault have been arrested and charged with sexual assault and robbery with violence.

However, the directive was suspended to allow the multi-sectoral team to conduct registration of the riders to be trained.

The main rapid drive starts on March 21 for two months and will be done at all Huduma Centres in the country.

Police said this will pave way for an imminent overhaul of the entire sector which is being conducted by the multi-sectoral committee tasked with the exercise.

“This is to give room to the government to reorganize the sector through a multi-sectoral committee working on a framework of implementation.”

Police spokesman Bruno Shioso, however, warned that the existing prohibition of boda boda riders from the Nairobi Central Business District (CBD) is still in force.

But some riders have been breaching the directive.

The smart card licenses that will be issued to all bodaboda riders will have NHIF details of the holders.

This will enable the riders to get medical attention whenever they are involved in accidents, which have become a tall order to handle.

Interior Cabinet Secretary Fred Matiangí said the bodaboda sector is one of the most critical areas in the country since it has offered millions of Kenyans a source of income.

He said on average, there are 22 million rides by the riders and if one multiplies it by Sh50, which is the minimum fee, they charge it comes to more than Sh1 billion daily that is realized in the sector.

He said the president had ordered the waiver of the registration fee of Sh5,800 for all those in the business to ensure all can be registered.

Matiangí said a recent report handed to him on the business showed up to 60 per cent of the 2.4 million riders in the country are not insured.

More than 70 per cent of them are not trained on how to ride the motorcycles apart from the brief sessions they receive in estates and homes.

“There is no regulation on the sector and it is in a mess hence the need to conduct the mass registration and proper documentation. It is better to forgo the money for now and have a clean sector,” he said.

120 motorbikes impounded by police in Machakos