TWO DID NOT MAKE THE CUT

Big day for Ruto as UDA crowns him presidential flagbearer

Narc Kenya leader Martha Karua and TSP boss Mwangi Kiunjuri are among the guests invited to the event.

• Former Machakos senator said the party has invited several guests to witness the   crowning of their party leader.

• The delegates will also okay UDA to officially join Kenya Kwanza Alliance and give the DP the mandate to engage and sign an agreement with other like-minded partners. 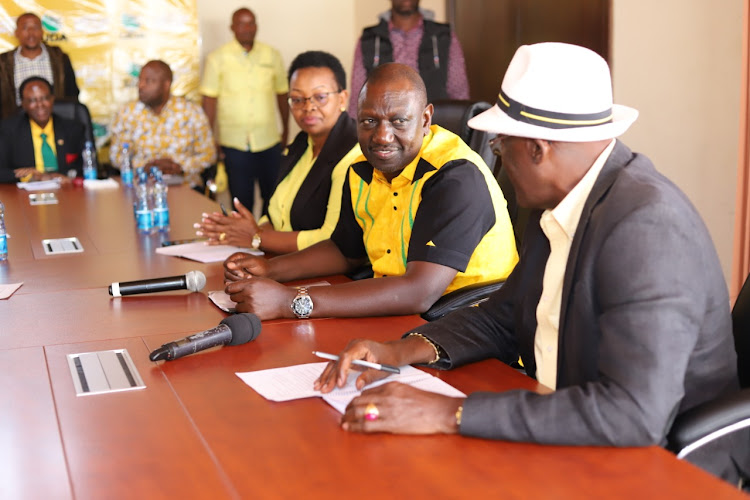 Deputy President William Ruto on Tuesday will secure the endorsement of the UDA party's top organ to face Raila Odinga of Azimio la Umoja in the presidential race.

UDA will hold the National Delegates’ Convention to crown the DP as the party’s presidential flagbearer.

This comes three days after the party’s National Executive Committee declared him the most suitable to face Raila after interviews.

Ruto faced two competitors in the battle for the party’s presidential ticket. They were 23-year-old Nancy Wanjiru and Orina Jephanei.

However, the duo were disqualified on technicalities.

“We have come to the end of the nominations exercise to get UDA presidential candidate. We have only one individual DP William Ruto who the NEC board will present to the NDC on Tuesday,” UDA deputy chairman Kipruto Kirwa said.

He said Wanjiru and Orina did not qualify because they did not meet certain criteria for the two-step process of verification of documents and interviewing.

“Looking at the young lady she is yet to finish school. Tracy did not qualify because she doesn't have a degree,” Kirwa said.

“Orina will not be able to proceed beyond today because he failed to meet the requirements as he couldn't raise the required fee of Sh1 million,” he added.

Close to 10,000 delegates are expected to attend the jamboree convention at the Kasarani indoor arena in Nairobi to coronate Ruto.

“Preparations are in top gear and everything will be concluded on time,” party chairman Johnson Muthama said.

“I cannot give you the list of the guests but they are many. For the delegates, we have aspirants and elected members. That is somewhere close to 10,000 people,” he said.

Muthama led a team of MPs and party officials in inspecting the ground ahead of the event.

This comes three days after Raila was crowned as the Azimio candidate at Jacaranda grounds in Nairobi.

The delegates will also okay UDA to officially join Kenya Kwanza Alliance and give the DP the mandate to engage and sign an agreement with other like-minded partners.

“There will be surprises. It will be a tsunani. Azimio displayed theirs on Saturday and ours is tomorrow. It will shock the country,” Nandi Senator Samson Cherargei, a close ally of the DP, said on Monday.

Mudavadi, Wetang'ula and Ruto are principals in Kenya Kwanza Alliance.

During Ruto's rally in Thika, Kabogo and Kuria attended the event and declared they were joining Kenya Kwanza.

Kuria, whose party was also scheduled to hold its NDC on the same day, postponed the event to enable him to attend UDA's.

“The delegates will endorse the DP and give him the power to sign an agreement with other parties under Kenya Kwanza,” Muriu said.

The postponement is to allow Moses Kuria to attend the UDA NDC.
News
3 months ago

Wamatangi said the decision to switch camps was made after intensive consultations.
News
3 months ago

Over 40 MCAs from Meru, Tharaka Nithi defect to Ruto's UDA

The MCAs were received by DP Ruto at his Karen residence in Nairobi.
News
3 months ago
“WATCH: The latest videos from the Star”
by JULIUS OTIENO Journalist, Political and Parliamentary Reporter
News
14 March 2022 - 23:00