Ruto: My four years of hell under Uhuru 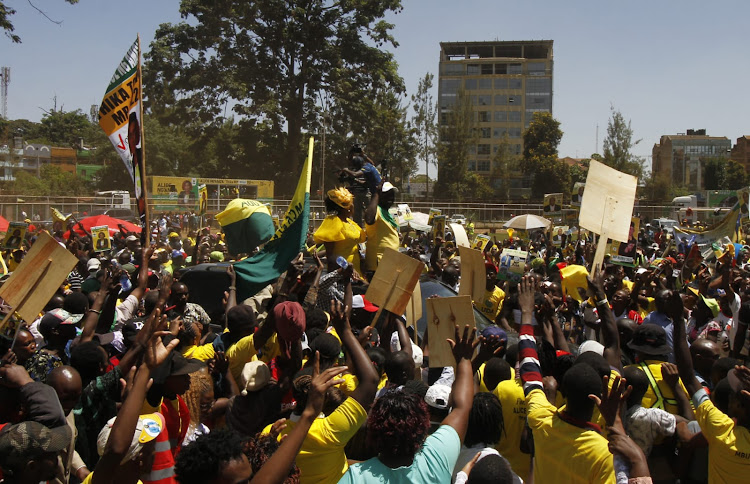 Deputy President on Sunday led his troops in demanding President Uhuru Kenyatta to assure Kenyans that he will respect the outcome of August 9 polls and peacefully handover power.

Speaking a day after Uhuru endorsed ODM Raila Odinga as his preferred successor, the leaders termed the move an insult to millions of Jubilee supporters who stood by him and voted him in 2013 and 2017 elections.

William Ruto fired salvos from Uhuru’s Kiambu backyard, saying the President and his ‘puppet’ should prepare for a humiliating defeat in the election.

The DP accused Uhuru of betraying him after supporting him 2013 when he was desperately looking for support.

The second in command said it was ironical that the President was now supporting Raila who was by then leading anti-Uhuru campaigns across the country.

Narrating his tribulations under Uhuru, Ruto recalled how he suffered under the administration he helped to put in power.

“When the President wanted a man to stand with him when he was facing ICC charges at the Hague, did Raila stand with him? Who stood with Uhuru?” Ruto said.

“We are surprised that the President is now telling us that amongst those who stood with him none can succeed him and he has now resorted to supporting mtu wa kitendawili.

"Mr President, you have frustrated us, called us thieves and chased us from parliamentary committees. I want to say we have forgiven you because we are God-fearing people. We have suffered in those four years but I want to assure you that your puppet, Raila Odinga will fail," Ruto said.

The DP was speaking during a Kenya Kwanza rally at Thika Stadium in Kiambu county.

He was accompanied by ANC boss Musalia Mudavadi, Ford Kenya leader Moses Wetang'ula and a host of leaders from Mt Kenya.

Ruto also accused Uhuru of dishonesty over the handshake deal that he (Uhuru) initially said had nothing to do with 2022 succession politics.

“I listened to him keenly yesterday (on Saturday). He indeed confirmed that BBI and handshake was never about unity but to impose a stooge and a puppet,” he said.

Mudavadi and Wetang'ula said it was shocking that the President accepted to attend the Jacaranda rally, the same venue where his (Uhuru) victory was being challenged.

The Bungoma senator described as the theatre of absurd the Saturday events where Raila was crowned the Azimio presidential candidate.

“[President Daniel arap] Moi brought you as a project and you failed. After 20 years you are here with another project called Raila Odinga. You Kenyans must reject them on August 9,” Wetang'ula said.

“You walk to a place where your own victory was being challenged. Don't you have any guilt?” Mudavadi said.

The ANC boss also hit at Kalonzo over his decision to reunite with Raila, saying the former vice president has been ‘bewitched’ to again carry the baggage, that is, Raila.

They alleged that the President is not ready to hand over power to his Deputy should he emerge the winner in the August polls.

“Be a gentleman that you are and apologise for using state resources and time to push for Raila’s candidature. I want to ask Uhuru to assure us that when your project will be defeated you will ensure a peaceful handover,” Murkomen said.

“The greatest threat of democracy is the outgoing President who is not ready to hand over power to whoever Kenyans will elect.”

“He said he doesn’t have Ruto’s debt. I want to say he is indebted to Ruto and we will repay that debt on his behalf on August 9,” Wahome said.

First Kiambu governor William Kabogo asked the President to retire in peace and avoid trying to influence his successor.

“We are not someone's property. We cannot be dictated. Our mothers also gave birth to us just like he was born,” Kabogo said.

Ruto saluted the leaders who have stood against State intimidation, threats and blackmail.
InPictures
10 months ago

Raila to Ruto: Set your tallying centre but prepare for defeat

Raila said he is not a coward and will vanquish Ruto in a free and fair contest.
News
10 months ago

The rally comes ahead of Tuesday's NDC at Kasarani stadium.
News
10 months ago

The party leader said the Western region will elect Raila as the President.
News
11 months ago