Several parties to sign pact with Azimio ahead of Jacaranda rally

The leaders of the respective parties will form a plenary to iron out finer modalities of the Coalition.

•The position of the Deputy President (running mate ) has not been discussed.

•Security was tight at the entrance of the venue and only invited guests were allowed in. 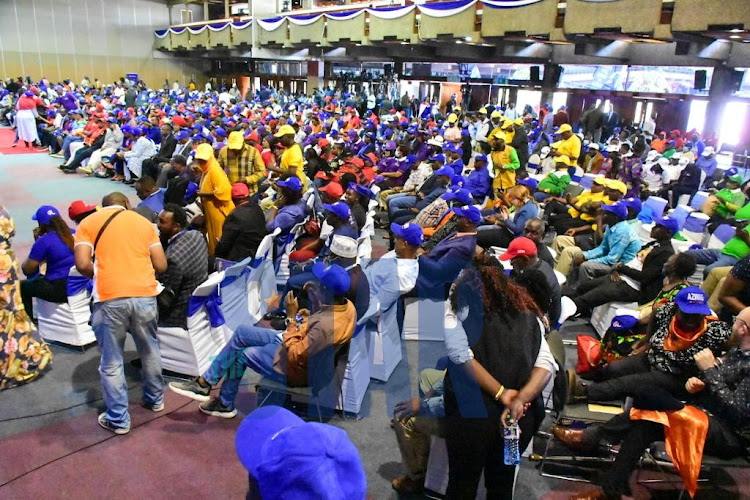 Over a dozen parties will be signing a declaration committing to Azimio la Umoja on Saturday.

Even the parties that signed the corporation agreement with Jubilee are expected to sign a pact with Azimio.

The chairpersons and secretary generals of the respective parties will form a plenary to iron out finer modalities of the Coalition.

The position of the Deputy President (running mate ) is yet to be discussed.

Meanwhile, delegates from parties supporting Azimio la Umoja began arriving at the KICC as early as 7 am for the unveiling of the formation's presidential candidate and coalition structures.

More than 300 delegates from at least 15 parties are expected at the coronation of ODM leader Raila Odinga as their presidential candidate.

Security was tight at the entrance of the venue and only invited guests were allowed in. Guests were screened at two security points and those without invitation cards were turned away.

Journalists were also not spared as they had to produce Media Council of Kenya accreditation cards and national IDs for counterchecking.

Aberdare Hall, the venue of the event, was filled with various colours representing the different parties.

Azimio la Umoja will name its presidential candidate on Saturday and start campaigns at Jacaranda Grounds in Nairobi later in the day.

Azimio is a giant political machine comprised of more than 15 parties.
News
3 months ago

Uhuru to be Azimio patron as Raila’s machine revs up

President gets critical role in coalition, he's not relinquishing influence
News
3 months ago

[PHOTOS] Glamour at KICC ahead of Raila's big day

Traders also took advantage of the event to sell their merchandise to the public.
News
3 months ago
WATCH: The latest videos from the Star
by ALLAN KISIA Political Writer
News
12 March 2022 - 13:41