The DP said that UDA is committed to leaving no Kenyan behind.

• Ruto, Musalia Mudavadi, and some of the Kenya Kwanza Alliance leaders arrived on Thursday morning from a 12-day trip to the US and the UK. 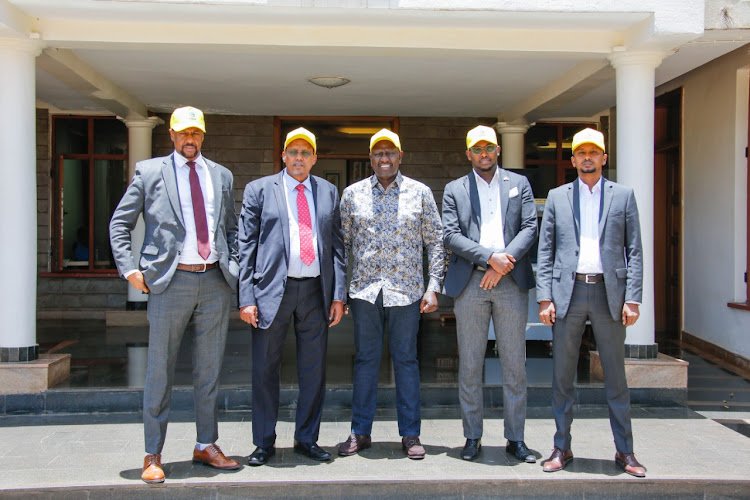 DP William Ruto meeting a section of the UDA aspirants on Thursday at his Karen residence home.
Image: WILLIAM RUTO/TWITTER

Deputy President William Ruto on Thursday hosted a group of Wajir leaders who are running for various elective seats on a UDA party ticket.

The leaders were led by Wajir senate aspirant Abbas Sheikh.

The DP said that UDA is committed to leaving no Kenyan behind.

Ruto, Musalia Mudavadi, and some of the Kenya Kwanza Alliance delegates arrived on Thursday morning from a 12-day trip to the US and the UK.

While on his trip, the DP asked the western countries to monitor Kenya's democracy.

He said that democracy is at stake, following his claims that Kenyans were being forced to join certain political parties.

The DP also said that he has confidence in IEBC in the forthcoming election.

Also, the DP said that he will accept the outcome of the results, challenging his main competitor Raila Odinga to declare the same.

During the inaugural Marlborough Dialogues in the UK, Ruto said the voice of the people must prevail above all other interests.

“We have stated publicly and unequivocally, we will do our utmost best to make sure the elections are free, fair, and peaceful,” Ruto said.

We will accept the outcome of the elections and decision of the people of Kenya,” he added.

Ruto was invited to speak during the first session of the Marlborough Dialogues Commonwealth Secretariat, a new forum for discussion and dialogue with political leaders and thinkers from within the Commonwealth.

Ruto said the August 9 elections is a defining moment for Kenya.
InPictures
2 months ago

Ruto heads to Thika on Sunday for mega rally

UDA legal secretary Murui says meeting will be attended by all the aspirants eyeing the UDA ticket
News
2 months ago
“WATCH: The latest videos from the Star”
by KEVIN CHERUIYOT Online Journalist
News
10 March 2022 - 17:32