In a statement, the Kanu chairman said the party is firmly in OKA.

• Gideon has further said that OKA was united as a coalition.

• Salat said that the party was tired of ‘babysitting’ the former vice president Kalonzo Musyoka. 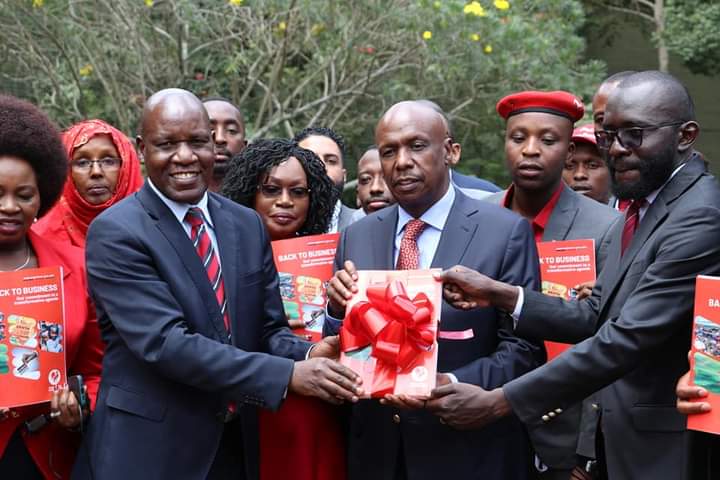 Gideon Moi and allies during the launching of manifesto at Kabarnet Garden in Nairobi on Wednesday, March 9,2022.
Image: Twitter, The KANU Party.

Kanu party leader Gideon Moi has denied the media reports that the party was planning to ditch One Kenya Alliance (OKA) for Azimio la Umoja.

In a statement, the Kanu chairman said the party is firmly in OKA.

“We wish to make it very clear that the party is firmly in OKA and is in constant consultation with the other partner members on the ongoing discussions with the Azimio la Umoja coalition," he said in a statement.

He has further said that OKA was united as a coalition, "and we have taken a common position that our talks with the Azimio and any other parties, must be structured, open and honest if we are to make progress."

Gideon Moi has said that sentiments by Party Secretary-General Nick Salat, including the declaration that the party will attend the Azimio coalition NDC on Saturday, were his personal opinions.

"The sentiments should not be misconstrued to be that of the party," he said.

On Wednesday, during Kanu’s Manifesto launch, Salat said that the party was tired of ‘babysitting’ the former vice president Kalonzo Musyoka.

“You know, if he has refused, just leave him. There is no time to babysit him. We love you and with or without him; we will have to go,” Salat said.

But Gideon said that Kanu is fully committed to OKA and is not about to deviate from that until friendly positions are attained in the ongoing grand coalition talks.

The OKA-Azimio grand coalition remains unclear after Martha Karua of NARC-Kenya asked for an extension of seven days, barely 24 hours before the signing pact last week.

However, OKA spokesperson Fredrick Okango has since said that the time addition was not a sign of disintegration

The launch happened at Kabarnet gardens in Nairobi.
News
3 months ago

The suspension is to allow accommodation of new interested parties seeking to join OKA.
News
4 months ago
WATCH: The latest videos from the Star
by SHARON MWENDE AND PURITY WANGUI
News
10 March 2022 - 11:35