Raila asked residents to vote for the Azimio la Umoja candidates only.

• Raila asked residents to vote for the Azimio la Umoja candidates only.

• Madoadoa remarks recently led to the arrest of Meru Senator Mithika Linturi during the UDA rally in Uasin Gishu in January, 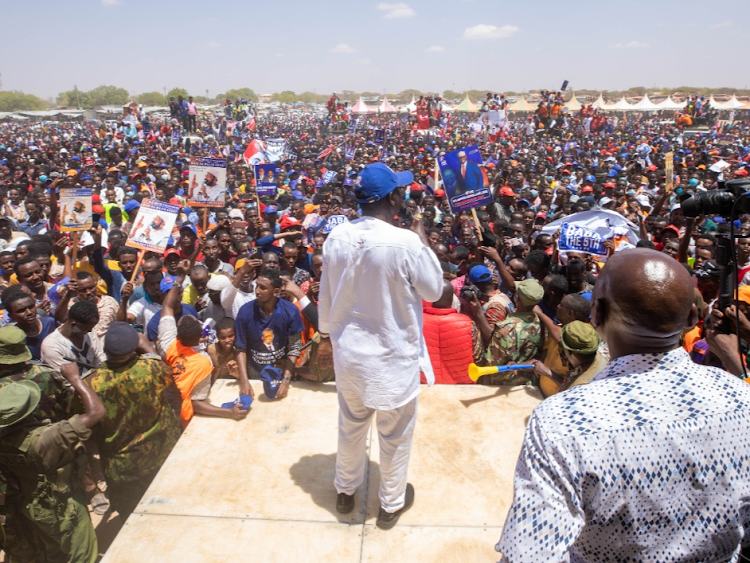 ODM party leader Raila Odinga has urged Wajir residents to back the Azimio La Umoja movement candidates only in the forthcoming general elections slated for August 9.

Speaking on Wednesday during the movement’s campaign trail, Raila said that the movement has many parties that have come together for the purpose of uniting the country, hence, the need to vote for them.

This is loosely translated to: "We want you to only elect candidates from the Azimio La Umoja. We want Wajir to be an Azimio zone. We don’t want any blemish in Wajir".

Loosely translated to: "To be Baba’s soldier, you must have a gun and a bullet. The gun is an ID and a bullet is a voting card".

Madoadoa remarks recently led to the arrest of Meru Senator Mithika Linturi during the UDA rally in Uasin Gishu in January.

However, the prosecution failed to prefer charges against him within the allocated time, forcing Nakuru Chief Magistrate Edna Nyaloti to dismiss the miscellaneous application by detectives who had sought to investigate the Senator for incitement.

"This miscellaneous application is therefore withdrawn, the file be closed and the cash bail be released," the chief Magistrate ruled.

The prosecution said they had withdrawn the miscellaneous applications as they awaits several areas to be covered by the investigating officer and charges to be preferred later.

The Office of the Director of Public Prosecutions (ODPP) said in a tweet that they had returned the file to the NCIC to fill in the gaps in the case.

Nyaloti on Monday ruled that the case had been closed following the delay.
News
11 months ago