They are shy and skittish, found in thick forests thus difficult to be sighted and counted

•Most of them in the 60s were exported to the US and the numbers were very low.

•Tourism CS Balala said there were 18 Bongos repatriated to Kenya in 2004 and now they are 67. 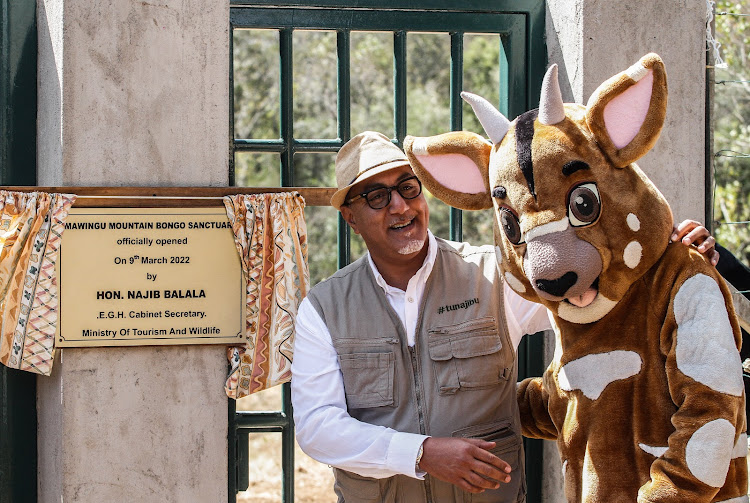 Five rare antelope species were on Wednesday released into the wild.

Mountain Bongo is shy and skittish, found in thick forests thus difficult to be sighted and counted.

Most of them in the 60s were exported to the US and the numbers were very low.

Most of the sightings are opportunistic and use indirect methods such as dung.

Balala said there were 18 bongos repatriated to Kenya in 2004 and now they are 67.

“By 2019, we had almost 77 bongos but because of weather and a small space a few of them died and that is why we created an action plan of extending the sanctuary,” he said.

The sanctuary will be 776 acres of land game ranch and the forest courtesy of the Kenya Forest Service.

Balala said they believe the rewilding will make them reproduce saying since 2019 to date, almost 30 new babies were born.

“This is a success story.”

Under the project, three paddocks are going to be opened gradually until there is full rewilding of the animal.

Those being released to 100 acres of land are monitored and given supplements until they get used to the environment and they are going to be opened to another 400 acres and eventually the entire 776 acres.

Kamau said KFS appreciates the important role the partners and stakeholders play in advancing the forest conservation agenda by informing the public of the perils of forest degradation and the benefits of sustainable forest management.

“A well-informed public is an important partner in not only helping us increase our forest cover but also protecting our existing forest cover,” Kamau said.

He said he is duty-bound to increase public awareness and demonstrate the importance of forests as critical habitat for wildlife and their nexus and the need to conserve them.

Kenya Wildlife Service senior veterinary officer Isaac Lekolool said he has witnessed the journey since the bongos were brought from the US.

He said before the bongos were moved, they were first immobilised.

Lekolool said the animals will constantly be monitored from a distance.

“They will be monitored for the next few months to make sure they have settled and gradually, when they start breeding, we start moving out and see how to increase the area that they occupy,” he said.

Lekolool said the fences will be pulled down to increase the area in which the bongos will be roaming.

Some Sh110 million has been put into the project and each year has a Sh62 million recurrent expenditure.

“They should be capable of browsing for food without the need for humans or other bongos in a herd and should be healthy and robust and genetically diverse,” he said.

Aruho said they should neither be too old, nor too young and should be socially compatible.

The five introduced into the wild include  Danni who is a  mating female, that is an elusive and shy mountain bongo.

Kavu (female), renowned for her horns and beautiful stripes, and an effective browser were released.

Others are Karama (male) and an Alpha male without being overly dominant and also an eligible bachelor ready to sire, Harare (male) - A sub-adult along with Owingu, and that holds a close bond with the two other male bongos which are critical for all the males’ survival was also released.

Owingu (male) - sub adult along with Harare was also released.

He said a close bond with the two other male bongos is critical for all the males’ survival.

The Ministry of Tourism, KWS and KFS launched the Mawingu Mountain Bongo Sanctuary on December 14, 2020, with the installation of one perimeter pole.

Located at the foothills of Mt Kenya, this 776-acre pristine natural forest provides a more extensive area to continue rewilding the mountain bongo in preparation for survival in the wild.

With the sanctuary being operational, MKWC and its partners will have the facilities to complete mountain bongo reintroduction end-to-end.

Every subsequent year, an additional 10 Mountain Bongos will be translocated into the sanctuary in groups of five every six months.

Individual mountain bongos to join the sanctuary will be selected offspring from the breeding herds and allowed to roam and mate randomly in the sanctuary.

It is estimated by 2025, the sanctuary will have 50-70 fully rewilded mountain bongos.

Mount Kenya Wildlife Conservancy is a non-profit trust dedicated to preserving the environment and wildlife.

It is located in Nanyuki, at the foothills of Mount Kenya (a United Nations World Heritage site). It is home to 28 different animal species, a population of roughly 1,200 different animals.

The conservancy's three main programmes include a rehabilitation project for the endangered mountain bongo antelope, an animal orphanage, and a conservation education programme.

The Kenyan mountain bongo is a critically endangered antelope sub-species only found in Kenya endemic to the Aberdare, Mt Kenya, Cheranganis Hills and the Mau Forests Complex, with only a few individuals left in the Eburu, Maasai Mau and South Western Mau.

The species numbers and range have declined in all these forests with limited information on the exact number of animals, though inferential figures stand at less than 100 individuals mainly confined to the Aberdare and Maasai Mau.

In 2003, bongo repatriation from the USA was initiated to establish a sustainable, in situ managed bongo population at the Mt Kenya Game Ranch now referred to as Mount Kenya Wildlife Conservancy from which multiple wild populations recovery strategies could evolve.

The principal objective of this project was to establish an in site captive breeding programme, in a natural setting, as the first phase of several conservation steps required to reintroduce mountain bongos to the wild.

The project aimed to re-establish a viable and self-sustaining population in the bongo’s native habitat.

The mountain bongo is listed as Critically Endangered by the IUCN/SSC Antelope Specialist Group (IUCN, 2003) and listed on Appendix III of the Convention on International Trade of Endangered Species of Flora and Fauna (CITES), which allows limited trade on the species.

In Kenya, bongos are accorded full protection under the Wildlife Conservation and Management Act, 2013.

Kenya has developed the 1st National Recovery and Action Plan for The Mountain Bongo in Kenya (2019-2023).

The goal of the strategy is to secure the minimum population size for mountain bongo within their ranges in Kenya, to achieve a national population of 730 individuals over the next 50 years.

For the captive population in Mount Kenya Wildlife Conservancy physical sighting and individual ID is used.