The application opened on Tuesday, March 1 and will run until March 13.

•Muyeka said the nomination date will be announced after conclusion of the negotiated agreement by Azimio party and the NEB.

•Among the expected consensus is for parties under Azimio to front one strong candidate in certain regions. 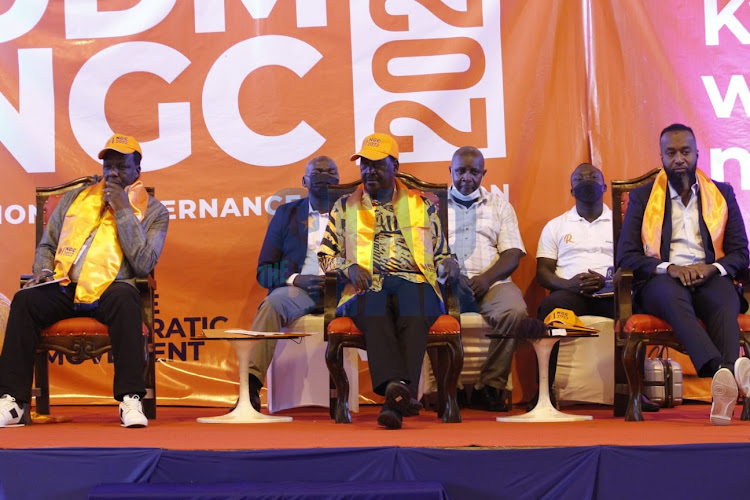 The ODM party has started receiving applications from aspirants seeking to participate in party nominations and vie on the party’s ticket during the August 9 polls.

National Elections Board chairperson Catherine Muyeka said in a press statement that the applications can be delivered in hard copy or online before the deadline.

The application opened on Tuesday, March 1 and will run until March 13.

“At the close of this deadline, the NEB shall issue a further notice indicating the time schedule for the party elections by registered members in the different counties,” Muyeka said.

She advised the aspirants to familiarize themselves with both the Kenyan and party constitutions, laws relating to elections and party primaries nominations rules to avoid the risk of being disqualified.

ODM is keen on overseeing foolproof nominations this year through an elaborate strategy to avert incessant chaos that had historically tainted the party's image.

Party leader Raila Odinga said in December last year that the party will use scientific surveys to assess the popularity of aspirants before issuing direct tickets to top-ranked hopefuls.

The party also intends not to hold nominations in its strongholds across the country in favour of consensus to avoid competitive primaries in regions where sibling rivalry could hurt its 2022 prospects.

“Note that the party is expected to discuss the nomination process under the Azimio Party and the NEB will share the agreed process after the conclusion of the negotiated agreement,” Muyeka said through the notice released on Wednesday.

Whereas the nominations will be for the ODM ticket, the outcome of the Azimio agreement is likely to ratify a decision for all successful candidates of the various nominations by parties under the formation to vie on the Azimio ticket.

This may mean, for instance, that in regions where ODM and say Jubilee will both have strong nominees, one of the nominees will have to shelve their ambition for Azimio to field just one strong candidate.

Muyeka advised aspirants who are yet to register as ODM members to do so before the outcome of the Azimio agreement.

The party will rely on a certified register from the Office of Registrar of Political Parties for the nominations. Aspirants who fail to register as party members can therefore not participate in the nominations.

Muyeka said online applications to participate in the primaries should be submitted via www.odm-neb.co.ke/party-primaries/ or be hand delivered at NEB offices in Karen.

Male gubernatorial candidates must submit an application fee of Sh500,000 while women, youth and people living with disabilities will pay Sh250,000.

Male deputy governors will will pay Sh250,000 while women, youth and people living with disabilities will pay Sh125,000.

Male aspirants for senatorial and MP seats will part with Sh250,000 while women, youth and people living with disabilities will pay Sh125,000 to vie for the same positions.

He has put together a powerful political machine of more than a dozen parties.
News
4 months ago

Rasanga says he has no favourites and will not back any of the aspirants for the party primaries.
News
4 months ago

The former Kajiado governor says he has an alternative if his party rigs him out.
Counties
4 months ago
by EMMANUEL WANJALA Radio, Print & Digital Reporter
News
02 March 2022 - 11:16