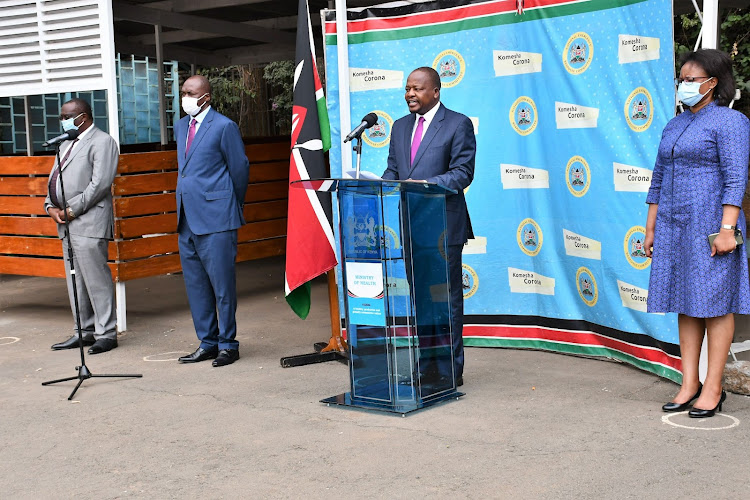 The Ministry of Health now blames the Public Service Commission for the delayed appointment of Dr Patrick Amoth as the substantive director general.

CS Mutahi Kagwe on Tuesday told senators that PSC has delayed to approve the ministry’s proposed organisational structure and staff establishment to allow it fill the position.

“The ministry has established the position of the director general in the new structure,” Kagwe told the Senate Health Committee.

Kagwe said the process of appointing a substantive director general will commence upon receiving the formal communication from the commission on the approved structure and staff established.

The CS spoke when he virtually appeared before the  panel alongside Health CAS Mercy Mwangangi to respond to a number of statements, including the delayed conformation of Amoth.

The lawmakers had demanded answers on why Amoth has occupied the position in an acting capacity since January 2020.  He succeeded Dr John Masasabi, who had been deployed to the position in April 2019.

A director general is a technical adviser to the CS.

“When it comes to the issue of the DG, we have been having Dr Amoth serving in acting capacity for long, why can’t he be confirmed? Why has it taken so long?” Narok Senator Ledama Olekina posed.

The senator said the ministry was in breach of Section 18 b of the Health Act, which is explicit about the organisation structure of the Ministry of Health.

“What does it take for Dr Amoth to be confirmed? We need to come up with a substantive statement in the House. Why is it taking so long for the Ministry of Health to confirm Dr Amoth?"

“Is he qualified or is he not because he cannot act forever. This answers must be given to us before we conclude our term as senators,” Outa added.

Mwangangi said they are expecting a response from PSC in a fortnight to officially start recruiting a substantive director general.

The senators demanded a report from the Ministry of Health on the progress of filling the position.

The CAS committed to submit a report in three weeks.

Varsity chiefs have waged a long war with hospital bosses to allow students train at the facility
News
5 months ago
“WATCH: The latest videos from the Star”
by JULIUS OTIENO Journalist, Political and Parliamentary Reporter
News
02 March 2022 - 03:53