Don’t expect me to work with Ruto – Kalonzo

“This is a matter which is very clear…" - Kalonzo.

•Kalonzo said decision not to work with Ruto was reached after talks within Wiper Party and OKA.
•He said neither him nor OKA were under illusion to work with UDA. 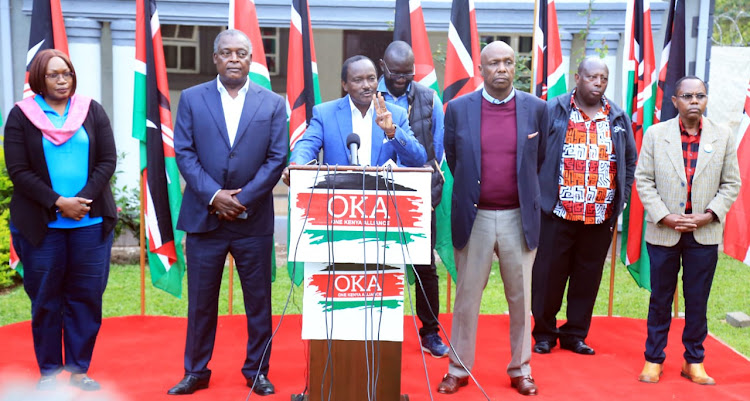 Wiper Party leader Kalonzo Musyoka has ruled out the possibility of working with DP William Ruto ahead of the August 9 election.

The remarks came hot on the heels of a statement he made on Tuesday indicating willingness to work with ODM leader Raila Odinga again despite the opposition chief having failed to honour their 2017-22 political pact.

In an interview on KTN Tuesday night, Kalonzo said the new working relations with Raila must be based on structured negotiations, a condition he said Raila was at liberty to accept or reject.

Asked if he would consider working with Ruto should Raila reject his demands, Kalonzo said: “For the avoidance of doubt, nobody should expect me on account of the statement I made today (Tuesday), no Kenyan should ever imagine that Kalonzo Musyoka can work with William Ruto.”

“This is a matter which is very clear…there is no indication whatsoever, and that is out and I made up my mind,” Kalonzo said.

He said the decision to rule out chances of working with Ruto or UDA are a result of consultations within the Wiper Party and the One Kenya Alliance in which he is a principal.

Whether or not Kalonzo should be taken for his word or not remains a matter under discussion considering he made a similar statement about Raila whom he now says he’s ready to work with.

During an interview on NTV on June 16, 2021, Kalonzo candidly stated that he would be “the most stupid person on earth” to support Raila for the third consecutive time.

During Tuesday’s interview, Kalonzo further clarified that the possibility for OKA to work with United Democratic Alliance (UDA) was similarly out of question.

“We are under no illusions whatsoever that OKA can work with UDA that is out of question,” Kalonzo said.

The former vice president further dispelled assertions of emergence of cracks within OKA on account of the statement he delivered in the absence of his co-principals.

“We are very solid. I can tell you my friend Gideon Moi and I for a start are like twins,” Kalonzo said.

He revealed that all OKA principals would on Wednesday sign some document that would give the formation official status ahead of their planned negotiations with the Azimio team.

Other than Kalonzo and Moi, other members of OKA are Nark Kenya’s Martha Karua and United Democratic Party leader Cyrus Jirongo.

“So don not attempt to lift Wiper out of OKA and then assign it the responsibility of having side discussions with UDA,” Kalonzo said.

Kalonzo says whether Raila honours 2017 pact or not, they will still wok together.
News
11 months ago

Kalonzo reveals bombshell accord with Raila about giving up power.
News
11 months ago
Post a comment
WATCH: The latest videos from the Star
by EMMANUEL WANJALA Radio, Print & Digital Reporter
News
02 March 2022 - 12:59
Read The E-Paper