Even if I die, don't take me to Azimio - Moses Kuria

Kuria said he will always be on the winning side.

• Kuria said he will always be on the winning side.

• The MP said the Azimio camp is not an option for him.

Gatundu South MP Moses Kuria has maintained that the Azimio la Umoja camp is not an option for him as the country heads to the August 9, polls. https://bit.ly/3MfCL1m 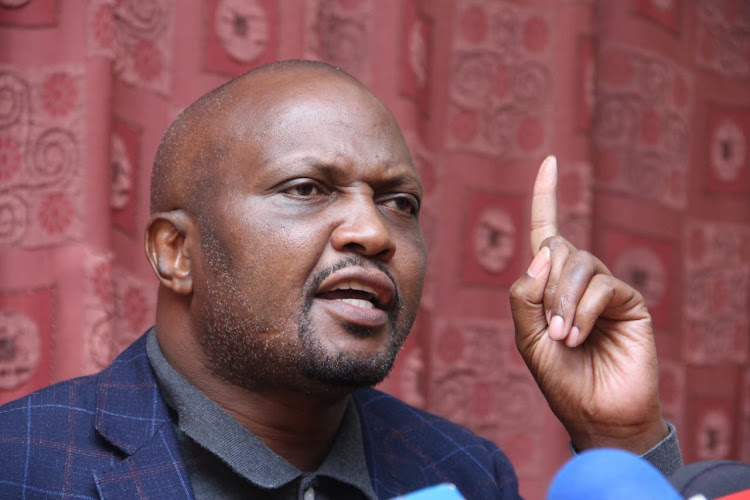 Gatundu South MP Moses Kuria has maintained that the Azimio La Umoja camp is not an option for him as the country heads to the August 9, polls.

Speaking in Kiambu County on Tuesday during the burial of the mother to the former Kiambu Governor Ferdinand Waititu, Kuria said he will always be on the winning side.

"... Kuna kitu ninajua, pengine sijui pahali niliko lakini najua pahali siko (I might not know where I am, but I know where I can't be),” Kuria said.

“Unajua kwa hii uhai mimi ndio ninajiamulia, hakuna siku utanipata kwa Azimio…lakini hata nikikufa, msinipeleke kwa Azimio (In this life, I’m the one to make the decision about my direction, you’ll never see me in Azimio…and even if I die, don’t take me to Azimio).”

Kuria, who is the leader of the Chama Cha Kazi party, has been unpredictable in his 2022 coalition formation.

Recently, Kuria met with OKA principals and said they had agreed to work together.

He said he informed them that he won't join them if they team up with Azimio.

The MP said that Jubilee Party’s popularity in the region will end soon.

He also lauded Waititu for the friendship they have had for a long time, adding that they have both been jailed for defending for fighting for the citizens.

Kuria, expressed his confidence for the gubernatorial seat, asking the incumbent Governor James Nyoro to be ready to hand over the office to him.

Kuria said Azimio ideals don't match his and that of his CCK party.
News
2 months ago

Kuria had released a poll asking Kenyans which seat he should vie for
News
2 months ago
“WATCH: The latest videos from the Star”
by KEVIN CHERUIYOT Online Journalist
News
01 March 2022 - 16:26