UDA had set February 28 as the deadline for submission of applications.

• The party is expected to conduct primaries from April 9 to 16 even as it assures aspirants of a free and fair exercise. 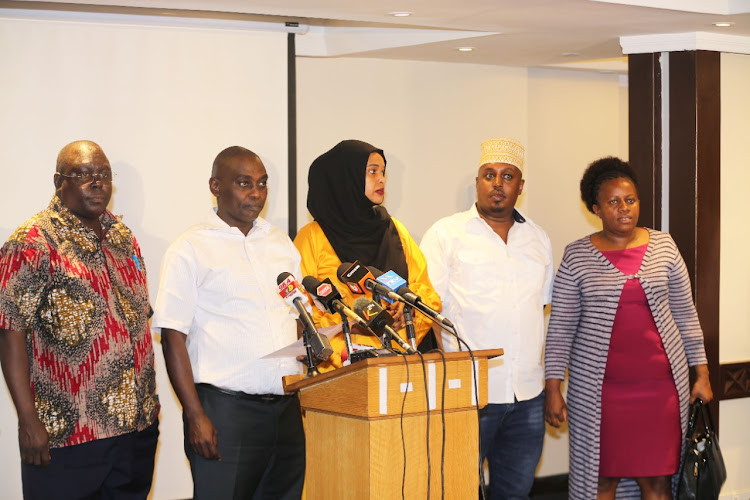 NO PREFERRENCE: UDA National Election Board members address the media on Wednesday, February 16 on the upcoming nominations to be held country wide.
Image: FREDRICK OMONDI

The United Democratic Alliance UDA has announced the extension of payment, registration and verification of aspirants eyeing various elective seats to March 5, 2022.

UDA National Elections Board (NEB) chairperson Anthony Mwaura said in a notice on Monday that all interested and qualified should submit their applications for nomination through the party’s website www.leaders.uda.ke .

Earlier, the party had informed its members that the date for application will be closed on February 28, 2022.

The party is expected to conduct primaries from April 9 to 16 even as it assures aspirants of a free and fair exercise.

The party's NEB had earlier announced that it does not have preferred candidates and the party will not issue a direct ticket to any aspirant.

"The Deputy President William Ruto has undertaken that the nominations will be free and fair. All aspirants will face Wanjiku's verdict on nominations day," Mwaura said.

Male aspirants seeking to be nominated for gubernatorial seats are being charged Sh500,000, Sh250,000 for females, and People Leaving with Disabilities are not charged anything.

Aspirants have up to end of February to pay nomination fee.
News
3 months ago

Kapondi also trashed claims that he has ditched the UDA party.
Counties
2 months ago
“WATCH: The latest videos from the Star”
by KEVIN CHERUIYOT Online Journalist
News
28 February 2022 - 17:17