Myths and Facts about female condoms​​

Female condoms are designed for one-time use, just like the male condom.

•The female condom can be put on up to 8 hours before intercourse and can be worn while doing other activities. 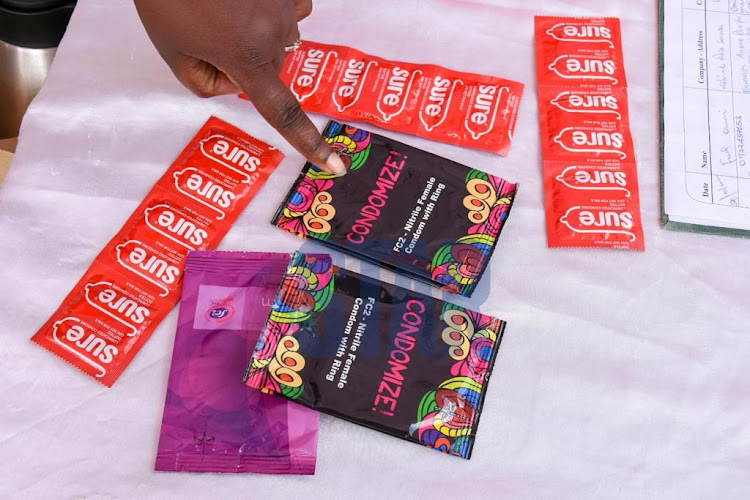 A display of female condoms during World AIDS Day at Undugu grounds on 1, December 2021./ MERCY MUMO

It can “get lost” inside the woman’s body.

False: While the inner ring keeps the condom in place, the outer ring prevents it from going fully into the vagina. Also, the vagina is a small tube (about 10 cm long in its normal state) that is highly elastic, but not “endless”.

It is safer to use double condoms: both female and male.

False: The friction between the two materials can make it easier for one of the two to break, you should only use one or the other but NOT both. However, you can use it at the same time as with any other contraceptive method such as the the pill, the contraceptive patch, contraceptive ring (a small soft, plastic ring that is placed inside the vagina which then releases a continuous dose of the hormones oestrogen and progestogen into the bloodstream to prevent pregnancy)  injections such as DepoProvera, implants,  and IUD.

False: Female condoms are designed for one-time use, just like the male condom.

It can be placed hours before sexual intercourse.

True: The female condom can be put on up to 8 hours before intercourse and can be worn while doing other activities.

It can increase sexual stimulation.

It is very expensive.

True: The female condom can cost up to 3 times more than a male one.A female condom costs Sh200 compared to Sh50 for a male condom. In Kenya, female condoms are provided for free at public hospitals and some private instutions such as Marie Stopes also make them available at a subsidised cost.It is too big/noisy.

Partially true: The material from which the female condom is made is not elastic like that of the male, so its size is larger. In addition, as it is not tight, friction generates a sound that does not happen with the male condom. This is simply because it is a different condom with different characteristics.

The effectiveness of the female condom ranges from 70 to 95% (the figure varies depending on the source).Condoms are indicative of sexual promiscuity by people who use them.

False: Studies from the UN have found that providing youth with comprehensive sexuality education, including information on condom usage, actually delays sexual activity. And, when those people do begin to have sex, they are more likely to have satisfying, protected, and consensual experiences. Everyone, including couples in long-term relationships, can benefit from condoms’ ability to prevent STIs and pregnancy.If I ask to use a condom, my partner will think less of me.

This article was produced by the Africa Women’s Journalism Project in partnership with Article 19, Meedan and the International Centre for Journalists.