Kalonzo said they have initiated structured dialogue with Jubilee and ODM.

• Coalition agreement will be signed on Monday. 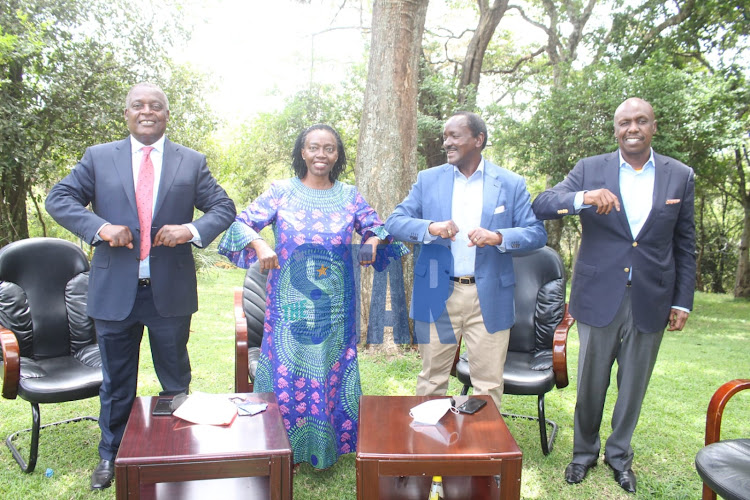 Addressing a press conference on Friday evening, Kalonzo stated that they will be engaging the Azimio team for a working relationship ahead of the August 9, polls.

"The One Kenya Alliance wishes to inform Kenyans that it has officially initiated open and structured dialogue with like-minded political formations- namely the Jubilee coalition and the ODM party," Kalonzo said.

The Wiper leader said they will be forming a grand coalition dubbed Azimio- One Kenya Alliance.

The coalition agreement will be signed on Monday as an affirmation of OKA's commitment to a just, inclusive and prosperous nation.

“Thereafter, we shall deposit the coalition agreement with the Registrar of Political Parties.”

At the same time, Kalonzo maintained that the OKA team will be unveiling its presidential flagbearer despite having announced willingness to work with Azimio.

This comes as Jubilee and ODM are expected to have a joint NDC on Saturday that reports indicate will culminate in the endorsement of Raila for the presidency.

So far, the Pamoja African Alliance (PAA) Party has signed a cooperation agreement with the ruling Jubilee.

PAA party patron Amason Kingi said the pact is a step in PAA's quest to bring the coast region to the national political bargaining table.

Other parties that signed the agreement include PNU, UPA, UPIA, and KUP.

Boost for Raila after PNU endorses his presidential bid

The party's top organ met at the Bomas of Kenya Thursday.
News
11 months ago