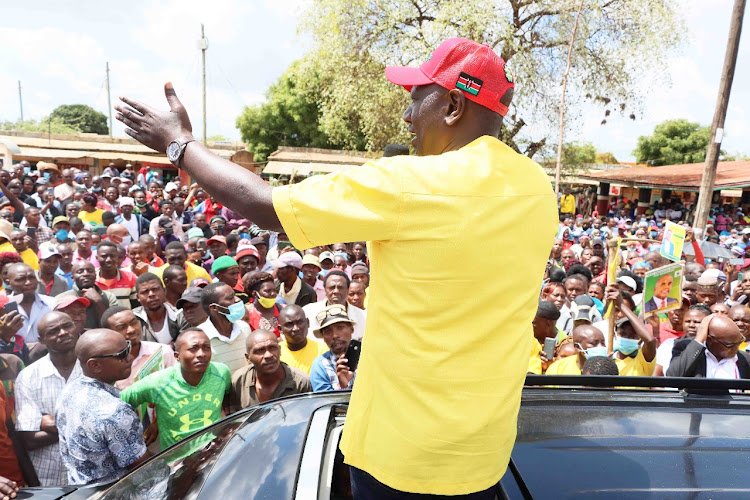 The DP claimed Raila has never voted for Uhuru but is now riding on him to traverse the country in search of votes to make him his successor.

He asked Raila to let the President retire in peace.

“You have resorted to using the President we elected to do your dirty work to look for votes for you when you have no agenda," he said.

Ruto claimed that the opposition chief was giving the Uhuru a difficult task of selling him to the electorate who have rejected him in previous elections.

“He is now hiding behind the President but we know who he is,” he said as he sustained his onslaught on Raila.

The UDA boss spoke in Wiper leader Kalonzo Musyoka’s Makueni base where his Kenya Kwanza brigade took their vote hunt.

Ruto, who traversed Makueni and Machakos counties in his marathon campaigns, was accompanied by a host of leaders as he rallied the region to elect him.

The country’s second-in-command attacked Raila as the worst enemy of devolution and a poor performer who failed to transform the lives of Kenya during his tenure in government.

He said Raila has been ‘sanitising’ corrupt officials who steal public funds in counties.

He alleged that Raila prevailed on governors to contribute (public) cash towards his presidential campaigns.

“If there is someone who is a danger to devolution, it is Mr Kitendawili,” he said.

Mudavadi assailed the former Prime Minister for supporting and downplaying the debt burden which he said has landed the country in deep economic crisis.

The former vice president persuaded Kalonzo against teaming up with Azimio saying the Wiper boss would have become a president by now had he not supported Raila in the past.

“You have carried Mr Kitendawili for many years, please, don’t carry him again,” he said.

Kalonzo was Raila’s running mate in both 2013 and 2017 general elections. Raila lost to Uhuru in both elections.

“These people are abusing Kalonzo. They are abusing him and again asking him to come to Azimio. How can you abuse me, ridicule me, insult me and then say you value me?” he posed.

Mudavadi said he ditched One Kenya Alliance where he was a co-principal alongside Kalonzo, Wetangula and Kanu’s Gideon Moi after realising they were being ‘managed’ to back Raila.

Raila arrived in Bomas after a 10-day trip to India.
News
4 months ago

Do not impose Raila on us, Ruto allies tell Uhuru

They say ODM chief is an enemy of people, with no track record.
News
4 months ago
“WATCH: The latest videos from the Star”
by JULIUS OTIENO Journalist, Political and Parliamentary Reporter
News
23 February 2022 - 23:00