• Stella Aura, director of meteorological services, says the country is expected to experience a normal rainfall onset with fair distribution over the areas expected to receive near to above average rainfall and poor distribution in the ASAL region.

• The March to May period is the major rainfall season over most of Kenya and much of equatorial Eastern Africa. 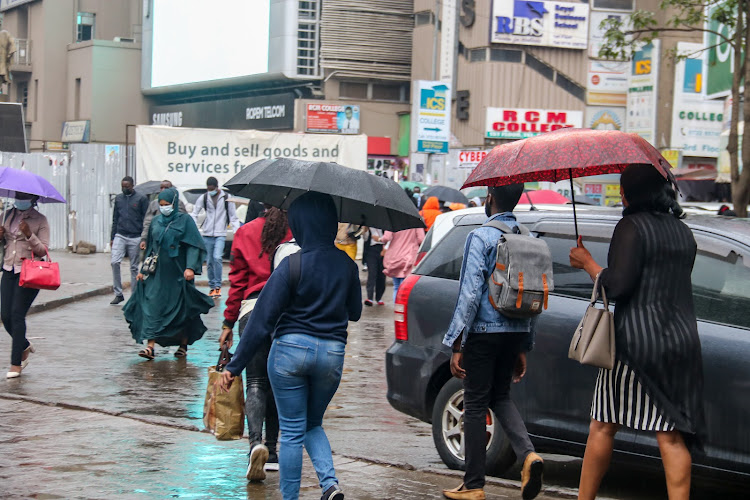 A number of city dwellers use umbrellas to take cover from the rainfall
Image: WILFRED NYANGARESI

The long rains are expected to start this month in parts of the country and continue until June.

However, the peak will be in April for most regions except over the Coastal Strip where the peak is expected in May.

This is according to the March-April-May 2022 weather outlook released on Tuesday by the Kenya Metrological Department.

Met indicated there will be enhanced rainfall in many parts of the country but some few areas will have near average rainfall.

Stella Aura, director of Meteorological services said the March to May period is the major rainfall season over most of Kenya and much of equatorial Eastern Africa.

Aura said the forecast is based on the prevailing and the expected evolution of Sea Surface Temperature Anomalies over the Pacific, Indian and Atlantic Oceans as well as the Synoptic, Mesoscale and local factors that affect the climate of Kenya.

The outlook showed that Northwestern Counties of Turkana, Samburu, Western parts of Marsabit are likely to be near to above the long-term average amounts for the season.

The Highlands East of the Rift Valley Counties of Nyandarua, Nyeri, Kirinyaga, Murang'a, Kiambu, Embu, Meru, Tharaka Nithi, and Nairobi will receive near to slightly above the long-term average amounts for the season.

Southeastern Lowland counties of Kajiado, Kitui, Makueni, Machakos, parts of Tana River and Taita Taveta will receive near to slightly above the long-term average amounts of rain for the season.

A perfect storm of weather extremes and deep inequality

In all, the rain caused 26 landslides and killed 176 people. More than 100 are still missing.
News
9 months ago