Yatani seeks to cap public debt at 55% of GDP

Sh3 trillion debt window has been depleted; there is only a Sh400 billion leeway before the debt cap is breached 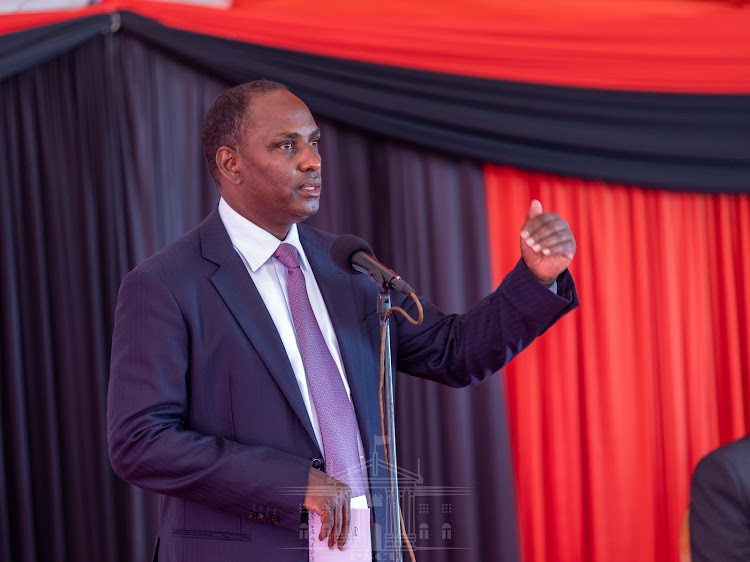 Treasury has proposed a review of the public debt limits which reverts to the old system based on a percentage of the country’s GDP.

CS Ukur Yatani, in a response to MPs on how he intended to deal with the thinning window for borrowing, said the debt should be capped at 55 per cent of the Gross Domestic Product.

MPs in 2019 approved a notice by the Treasury to increase the cap for state borrowing in nominal terms to Sh9 trillion, a move which provided the exchequer room to borrow Sh3 trillion.

By then, Treasury reasoned that the debt ceiling as was 50 per cent of GDP, had limited the government’s ability to fully implement the budget of the fiscal year 2019-20.

The Sh3 trillion window has been depleted with budget books showing that the country only has the leeway to borrow Sh400 billion before breaching the debt cap.

National Assembly Budget Committee in its review of the Budget Policy Statement 2022 proposed that the 2022-23 funding deficit be reduced to Sh400 billion from the Sh846 billion.

It is forecast that by end of June 2022, the stock of public debt would hit Sh8.6 trillion.

"The committee is concerned that the BPS had proposed Sh846 billion as the overall deficit which if approved has the potential to breach the approved debt ceiling of Sh9 trillion," the Kieni MP Kanini Kega-led team said in a report tabled in Parliament.

Yatani on February 3 wrote to Parliament informing of the Treasury’s intention to amend the Public Finance Management (PFM) Act, 2015 to set the debt cap at the said percentages.

“The National Treasury is committed to presenting the proposed amendments to Parliament for approval as soon as public consultations are finalised,” the CS said in the letter to Assembly Clerk Michael Sialai.

Treasury also wants the law changed to provide that public debt is not restricted as a charge on the Consolidated Fund.

The bid is to get a leeway to charge ministries, state departments, and agencies repayments for public debt.

“A public debt and resultant financial obligations incurred by the national government is a charge on the Consolidated Fund.

"Unless the CS determines by regulations approved by Parliament that all or part of the public debt or financial obligations is a charge on another public fund established by the national government or any of its entities,” the draft PFM (Amendment) Bill, 2021, reads.

The draft bill shows that Treasury would seek reviews at any time the public debt would exceed the limit set under the PFM Act – due to depreciation of the shilling, balance of payment imbalances, or abrupt fiscal disruptions.

“The CS shall provide Parliament with a written explanation on the said circumstances leading to the breach of the limit and provide a time-bound remedial plan,” the proposed law reads.

The law specifies the disruptions to include war, health pandemic or natural disasters.

The draft bill further shows that the Treasury seeks to provide that financial obligations relating to loans are maintained at a sustainable level as advised by the Public Debt Management Office.

Yatani said the Treasury is planning to have a stakeholder engagement forum subsequent to the publishing of the PFM (Amendment) Bill, 2021, and associated legal notices.

“We will collect public comments on the same in conformity with the Statutory Instruments Act, 2013, and thereafter engage Parliament to finalise the amendments,” the CS said.

Treasury says the 55 per cent is informed by the Debt Sustainability Analysis report of March 19, 2021.

The report classified Kenya’s debt carrying capacity as medium with a threshold of the present value of debt to GDP at the said rate.

Yatani further said that the Treasury constituted a multi-agency task force to among others provide – in the Acts and Regulations, for proper definitions for ascertaining the level of public debt.

The proposals had been forwarded to Attorney General Kihara Kariuki, who advised that the amendments be presented independently – hence the bill under public participation.

China is our biggest lender, accounting for 67 per cent of external debt
Business
3 months ago
“WATCH: The latest videos from the Star”
by MOSES ODHIAMBO Journalist and Political Writer
News
16 February 2022 - 23:00