I was offered bribe to scuttle Ruto case - witness 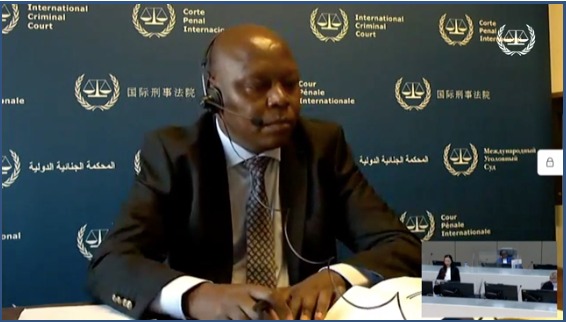 The first prosecution witness in the case against lawyer Paul Gicheru at the ICC was offered a bribe to recant all his testimonies, the court heard on Tuesday.

Gicheru is accused of interfering with witnesses in the DP William Ruto case that was terminated in 2015.

A terminated case can be revived if there is new evidence.

Witness P0800 yesterday said those who offered the bribe asked him never to appear before the court when needed to testify.

The witness said the people behind the scheme approached him on more than one occasion in the same location in Kenya.

“The very first approach was done by Person Number 2. It was done by telephone and then in person. He contacted me and then we met,” he said.

The new revelations emerged on the first day of lawyer Paul Gicheru's trial at the International Criminal Court based in the Hague, Netherlands.

A calm and collected, smartly dressed Gicheru denied all the eight lengthy charges read out to him by a court clerk.

He only spoke twice when the judge acknowledge his presence and when he took the plea.

Witness Po800 said he immediately contacted ICC prosecutors following the development “because he did not want the case to collapse.”

“I was asked to make sure I record every conversation and I accepted,” he said.

Witness P0800, who was testifying during the commencement of the trial, said he was keen to get the information about who had sent Person Number 2 and how much he was willing to give.

Gicheru, who was before presiding judge Miatta Maria Samba, pleaded not guilty to eight charges of interfering with witnesses in the case against Deputy President William Ruto, which was terminated over insufficient evidence.

The team decided which Prosecution Witnesses should be targeted.
News
7 months ago

The prosecution, led by James Stewart and Anton Steynberg, said they believe Gicheru committed offences against the administration of justice in order to undermine the case against Ruto and then Kass radio presenter Joshua Arap Sang.

The defence team was led by​ Michael G Karnavas and Suzana Tomanovi.

The prosecution said it has lined up evidence to show money to interfere with witnesses came from Ruto through Gicheru, who was based in Eldoret.

Steynberg said Gicheru organised a systematic criminal scheme aimed at approaching and corrupting witnesses through bribes and other inducements in exchange for their withdrawal as witnesses and/or recantation of their prior statements to the prosecution.

“When evidence is corrupted, justice is denied. Those seeking to undermine the court’s ability to offer redress to injustices must not be allowed to walk free,” Steynberg said.

He noted that when dropping the charges against Ruto and Sang, the judges condemned levels of interference of witnesses.

The court heard that interference commenced in early 2013 and Gicheru coordinated a scheme to identify and locate potential witnesses through bribery and intimidation. The court was further told that four key witnesses withdrew from the case.

Steynberg said Gicheru did not work alone and that there were two suspects who are still at large.

Steynberg said another witness P0540 disclosed to P0800 that “The Big Man” offered him Sh1.5 million and additional expenses “to join the Big Man’s team and withdraw his assistance to the ICC.”

Steynberg added that they have bank records showing huge sums of money deposited, which confirms what witnesses have said.

He said they will also provide the court with recorded messages between the accused and witnesses and bank texts confirming the deposits.

He said Gicheru was the key manager at his office in Eldoret and decided which witnesses were to be targeted and the amounts to be given to them.

“He ensured money was available for them and assigned tasks to locate the witnesses in and outside Kenya,” he told the court.

The ICC issued an arrest warrant against Gicheru and Philip Kipkoech Bett on March 10, 2015.

On November 2, 2020, Gicheru surrendered to the authorities of The Netherlands pursuant to this arrest warrant for offences against the administration of justice consisting in corruptly influencing witnesses of the court.

On November 3, 2020, he was surrendered to ICC custody after the completion of the necessary proceedings.  The first appearance of Gicheru before the court took place on November 6, 2020.

On July 15, 2021, ICC Pre-Trial Chamber A confirmed the charges of offences against the administration of justice brought by the prosecutor against Gicheru and committed him to trial.

The offences against the administration of justice (Article 70(1)(c) of the Rome Statute) were allegedly committed between April 2013 and the termination of the Ruto and Sang case on September 10, 2015, in Kenya.

Ruto and Sang were accused of crimes against humanity (murder, deportation or forcible transfer of population and persecution) allegedly committed in the context of the 2007-2008 post-election violence in Kenya.

One witness was promised Sh5 million and told to keep it under her mattress.
News
7 months ago