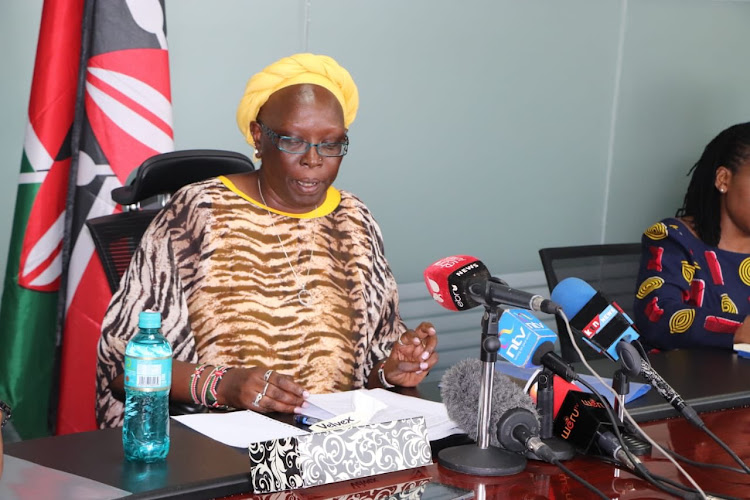 Trade CS Betty Maina is set to appear before senators over the government’s ban on scrap metal business.

This is as pressure mounts on President Uhuru Kenyatta to rescind the decision.

Maina will appear before the Senate’s Trade and Tourism committee to explain the circumstances that led to the order thereby rendering thousands of Kenyans jobless.

The summon follows a petition by Nandi Senator Samson Cherargei who argued the blanket ban on exports and dealings in scrap metal had dealt a blow to thousands of families that rely on the business.

“The CS should state the policy behind the indefinite and inconsiderate ban on scrap metal exports and dealings in Kenya, giving reasons for the move,” Cherargei said in the statement presented to the House.

The announcement sparked uproar with dealers appealing for lifting of the ban. MPs also criticised the decision as irrational.

In his statement, Cherargei, a key ally of Deputy President William Ruto, sought to know whether all stakeholders in the industry were consulted prior to the ban.

The lawmaker wants the CS to divulge whether any culprits have been arrested in connection to vandalism of the state infrastructure.

Cherargei said many genuine businesses are being hurt by the ban, adding that large businesses, including the Associated Battery Manufactures, have threatened to close shop because of lack of raw materials.

“The President recently said he had stopped any dealings in the scrap metal, including exports, yet there is a law that was passed by this House to regulate.

“The CS should state any precautionary measures, if any, which the government has put in place to cushion the thousands of workers whose jobs have been affected,” Garissa Township MP Aden Duale said.

The legislator accused CS Maina and PS Kaberia of misadvising the president.

“Please, go and tell your CS, Betty Maina, to read the law. Also tell her her office embarrassed the president,” the former Majority leader said.

Last week, Nakuru Scrap Metal Association appealed to the President to lift the ban, saying they were incurring massive losses that could lead to layoffs.

Led by chairman Joseph Wandaka, the association said the order has affected their operations and plunged them into heavy losses, despite doing genuine business.

“When there was vandalism of critical power installations in Nairobi and Naivasha, the yards raided belonged to some rogue Kenya Power staff and none of us were indicted,” Wandaka said.

In 2015, the government enacted Scrap Metal Act to regulate the scrap metal business, including exportation.

The Act illegalises scrap metal exports with an exception that Industrialisation can allow such trade where the material is not in demand by local industries.

However, the law has largely not been enforced.

Public agencies acting as custodians of critical infrastructure should also be actively involved in assessing and mitigating threats.
Opinion
5 months ago

Company urges public to report incidents of vandalism and other criminal activities.
News
5 months ago

Police plan to conduct operation on scrap metal dealers in the country
News
5 months ago
“WATCH: The latest videos from the Star”
by JULIUS OTIENO Journalist, Political and Parliamentary Reporter
News
15 February 2022 - 23:00