Mudavadi accused Atwoli of giving handouts to Khwisero residents to back Raila.

•He spoke on Tuesday during a rally in Khwisero, Kakamega County. 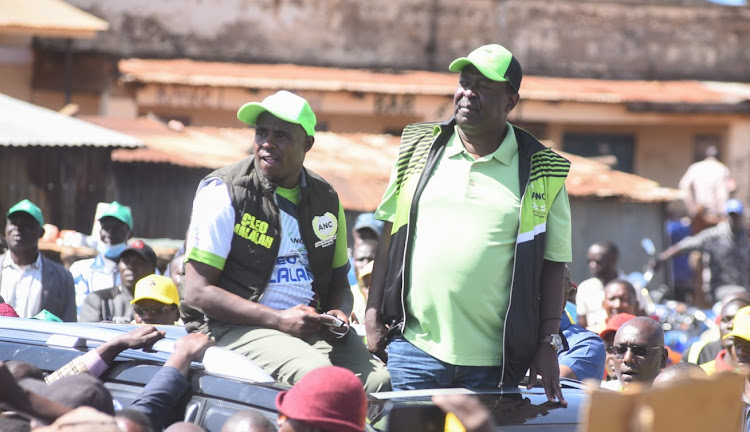 ANC party leader Musalia Mudavadi has dared Cotu boss Francis Atwoli to stop hiding in the shadows of President Uhuru Kenyatta and face him head-on at their home turf in the Western region.

"With all due respect, Atwoli, stop hiding behind President Uhuru to abuse people. If you are man enough, come and abuse me here and face me directly but don't hide behind the president," Mudavadi said.

He spoke on Tuesday during a rally in Khwisero, Kakamega County.

The ANC party leader sensationally accused Atwoli of giving handouts to Khwisero residents in an attempt to lure them to Raila Odinga's Azimio la Umoja movement.

"Atwoli is stepping on the people of Khwisero. He thinks it's leadership when he calls people to his house to give them handouts," Mudavadi said.

Atwoli recently labelled Mudavadi's ANC 'a political commercial Kiosk' saying it is not a party worth the respect of Kenyans.

The Unionist said, "If ANC was a political party, I would have advised its leadership/staff to seek therapy because they are in the "bargaining" stage of grief after ANC's burial on 23/1/2022. But because ANC is a political commercial Kiosk, I will sleep peacefully knowing Western is in Azimio."

According to Atwoli, the MPs came for a political consultative meeting.

In its statement, the ANC party said Mudavadi will continue in his mission to liberate the Mulembe nation despite Atwoli's insults.

"No amount of incessant insults and pedestrianly-sycophantic public display by the Atwoli and ilk mercenaries for hire will deter Musalia Mudavadi’s resolve to liberate the Mulembe nation from the political entanglement of a state project," the party said.

Atwoli: All presidents were first in opposition, who is Ruto?

Atwoli said there will be no rerun in the August poll.
News
5 months ago

ANC is a political commercial kiosk - Atwoli hits back

Atwoli was responding to ANC 's statement in which he was accused of "incessant insults".
News
5 months ago

Befriending Ruto is not key to presidency, Atwoli tells Mudavadi