Musalia to Raila: Stop it! You never paid for my chopper in 2017 campaigns

The ANC leader said he sacrificed financially for Raila in 2007 and 2017 polls. 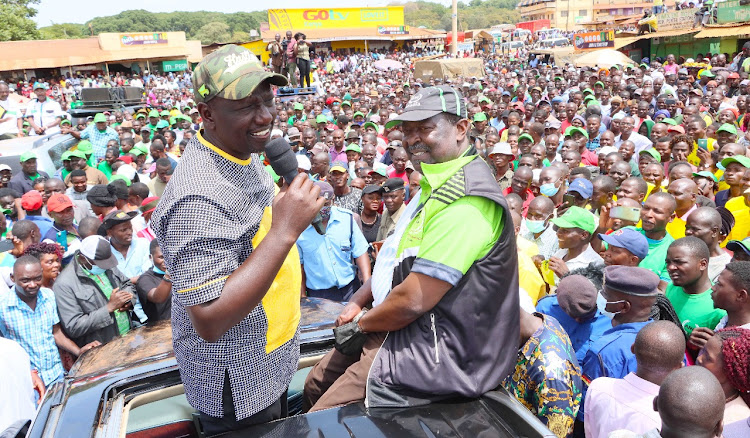 An angry Amani National Congress party leader Musalia Mudavadi has lashed out at ODM boss Raila Odinga for being unappreciative despite donating his chopper to him for the 2007 and 2017 campaigns.

The ANC leader said it was unfortunate that Raila has never thanked him for the material sacrifices he gave during the two general elections.

“I helped Raila in 2007 and in 2017 I was his campaign manager, I even dedicated my chopper that is here to carry him around and I did not ask even for a single coin from him,” Musalia said.

The former Raila-ally turned foe, tore into the former prime minister telling him off for failing to reciprocate his support for him in 2007 and 2017 presidential polls.

“Wetangula here also helped him and did not ask him (Raila) for a single coin. When will he help any of us?” a worked up Musalia said during a campaign rally in Khwisero, Kakamega county on Tuesday.

The ANC leader asked Raila to retire from politics and support people who have sacrificed for him in the past.

“He should clear the jam in front of us and pave the way for other leaders to take over,” he said.

He went on: “We can’t be supporting him a year in year out because he is our neighbour, no, even a neighbour has a son whom he wants to lead.”

This is the first time that a bitter Musalia was going ballistic on Raila whom he supported in 2007 and the 2017 general election.

Previously, details on how Raila’s past presidential campaigns were financed have remained a closely guarded secret.

However, Musalia’s outbursts could spill the beans even as Raila assembles another political machine to face the ANC leader’s Kenya Kwanza allied juggernaut.