Tumechoka! Mudavadi asks Raila to retire, give others chance to lead

He insisted that all they want is respect from the president.

• Mudavadi said Kenyans are tired and it is time the former prime minister gives a chance to other people to lead.

• He termed the Orange party boss as a state project being imposed on Kenyans. 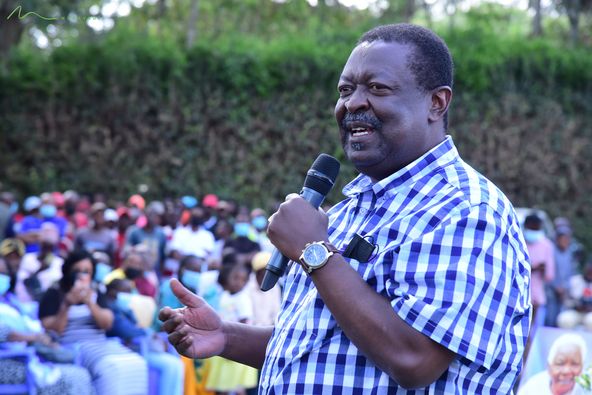 Amani National Congress leader Musalia Mudavadi has once again hit out at ODM leader Raila Odinga asking him to retire from politics.

Speaking in Butula, Busia County, on Monday, Mudavadi said Kenyans are tired and it is time the former prime minister gives a chance to other people to lead.

Mudavadi said that in 2007 and 2017, he shelved his presidential ambitions in favour of Raila and Ford Kenya's Moses Wetang'ula did the same in 2013.

This loosely translates to, “We are tired. We are telling Raila to get out of the way so that other people can move forward.”

Mudavadi termed the Orange party boss as a state project being imposed on Kenyans.

The ANC leader accused President Uhuru Kenyatta of planning to interfere with his succession despite having served for two terms as head of state.

He insisted that all they want is respect from the president.

"We want his respect as the leader of our country and once he finishes his term, he should rest and engage in peace initiatives, Kenyans want to choose their leader. That is why we are saying we don’t want political projects," Mudavadi said.

Speaking at the Coast over the weekend, Mudavadi said it was now crystal clear that President Uhuru is the patron of the Azimio La Umoja coalition, which is pushing for Raila Odinga’s presidency.

He said Kenyans should not be coerced to vote for any individual.

“Let us respect the constitution. Let the people of Kenya decide,” Mudavadi said.

The ANC leader said Kenyans should also not take up the jobs of the people who are going to resign from government to seek elective seats.

“I’m a living example. I was a vice president for only two months, therefore do not take up the jobs if they are being offered in exchange for your vote,” he said.

“What will you do in only four months, wait for us to make the next government and we will give you good employment.”

The rally will be hosted by ANC leader Musalia Mudavadi.
News
4 months ago