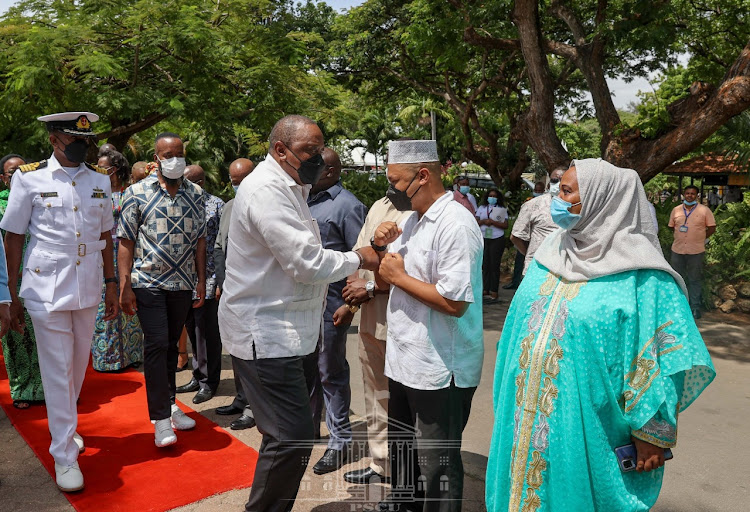 President Uhuru Kenyatta has set the stage for a daring political duel with his Deputy William Ruto and, for the first time, publicly declared that he is no pushover.

Uhuru gave signals that he would openly back ODM leader Raila Odinga in the August 9 election, saying his Jubilee party will team up with other outfits to form a government of respect.

“I will not get tired telling Kenyans to elect our party because it has worked. We want to team up with leaders like (Mombasa governor Hassan) Joho and others who want to work so that we can continue,” he said.

Uhuru said he and his party have been at work all through as others politic round the clock, adding that he will now hit the road because it is now time to do politics.

The President said he has become Ruto’s punching bag, but said he is not a political weakling and dared his deputy and his Kenya Kwanza brigade to a political duel.

Speaking during the launch of Universal Health Coverage in Mombasa on Monday, Uhuru declared he will be supporting and publicly campaigning for his handshake partner.

The remarks come in the wake of incessant attack by the DP and his newfound partners, Musalia Mudavadi (ANC) and Ford Kenya boss Moses Wetang'ula.

They criticised Uhuru’s government as a failed administration that has ruined the economy and sunk the country into deep debt.

They further claimed the President was using Raila as a decoy to stay in power after the end of his term.

But Uhuru rubbished the claims, saying he has become the centre of political attack because his attackers know his political might.

“There is a saying that goes, ‘Matusi ndio ushanga wa kiongozi’. If you are not being insulted, then you are not a leader," he said.

"If you see them abusing me, it is because they know they are dealing with a person who is no pushover.”

Uhuru narrated how his deputy told him off when he cautioned him against round-the-clock politics.

“Na wakati nilisema kwa heshima, wacha tufanye kazi tutarudi wakati wa siasa ukifika. Nikaambiwa wewe huna uwezo wa kutuambia tuache [When I respectfully demanded that we deliver to the electorate first, and that the time for politics would come, I was rebuffed],” he said.

Uhuru added that he was working contrary to claims by Ruto and his team.

Joho led a section of Coast leadership in criticising Ruto on the contentious issue of transfer of port services to Nairobi and Naivasha.

The national government issued directives that all Nairobi-bound and cargo on transit must be railed to Nairobi via the Standard Gauge Railway. The cargo should also be cleared from either Naivasha or Nairobi.

“On Saturday, they made me their agenda (during Ruto’s rally at Tononoka). They called me an academic dwarf when I was agitating for these issues," Joho said.

"They are now telling Mombasa residents that they will revert port services to Mombasa. They are playing with your emotions,” he added.

Joho said the issue of SGR has already been resolved as importers are free to either use the SGR or the trucks to Nairobi.

Those who spoke during the event include MPs Abdulswamad Nassir (Mvita), Badi Twalib (Jomvu), Omar Mwinyi (Changamwe) and Mishi Mboko of Likoni.

Kingi  asked Uhuru to fast track the programme on resolving the emotive land matter at the Coast.

He said Uhuru's predecessors did not understand the issue of land problems at the Coast.

“I want to say this. There is one thing that has really disturbed the Coast region— the land question. You have understood the land problem in the region and you have promised to resolve it,” he said.

Kingi also said after independence, the then President Jomo Kenyatta launched the programme of the government buying land from settlers to resettle Kenyan who were squatters.

He said Uhuru copied the same model and his government has started a programme of buying land from absentee landlords to resettle the landless people of the Coast.

“You have started buying the Mazrui land in Kilifi and want this programme to go on in all the affected regions of the Coast. All parcels of land should be bought by the government and given to residents,” he said.