•The Health CS Mutahi Kagwe in October revealed that out of 300 health workers sent for an English language test, only 10 passed. 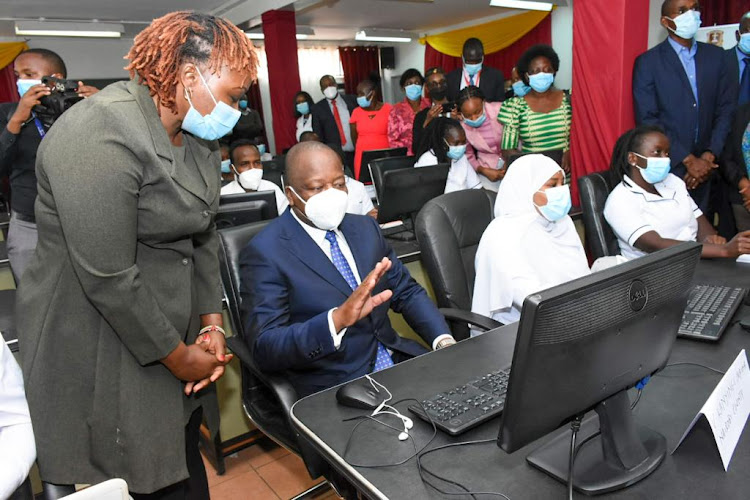 Health CS Mutahi Kagwe during the launch of the administration of qualified nurses to go and work in overseas at KMTC on 1, February 2022./ MERCY MUMO

The government has started retraining nurses following reports that many failed to secure jobs in the UK due to poor command of the English language .

Health CS Mutahi Kagwe in October revealed that out of 300 health workers sent for an English language test only 10 passed.

The ministry on Tuesday launched the training requirements for the purposes of fulfilling the bilateral agreement between the governments of Kenya and the UK that was signed in July last year.

The first cohort of 300 nurses begun training at the Kenya Medical Training College in Nairobi for a period of six weeks before they can re-sit the tests.

Foreign nurses seeking to work in the UK are required to pass the International English Language Testing System (IELTS) or Occupational English Test (OET), as well as Computer Based Test (CBT).

“The English training and accreditation programme is a key step in enabling all Kenyan nurses to access employment opportunities in UK,” she added.

Kenya is expected to send at least 20,000 nurses to the UK in a span of three years in an agreement inked between the two countries when President Uhuru Kenyatta visited UK in July.

The governments of Kenya, UK and Northern Ireland signed a bilateral agreement on July 29 for collaboration in the healthcare workforce.

The deal allows Kenyan healthcare professionals to be recruited to work in the National Health Service of the UK.

“I realised there were a few teething problems when this programme begun. The first cohorts of nurses experienced a few issues some of which I was rebuked for,” Kagwe said.

“The first batch that we are training right now is about over 300 nurses, the problem is not on the other side, they expect us to send thousands of them but they also expect us to send trained and qualified people,” the CS noted.

Unlike IELTS, the Occupational English Test is scored in grades (A-E). To pass, an overall grade of B or A is required.

In the deal, the nurses will be given three-month free accommodation on arrival for the three-year contract, which is renewable for another three years.

The UK government will also foot air tickets for those departing, and they will be eligible to pay progression, overtime, leave entitlements and they can also relocate their families after a period of three months.

Kagwe indicated that out of the 300 nurses who sat for the test only 10 passed.
News
9 months ago

Kagwe Marriot say the recruitment mechanism has been strengthened in accordance with WHO code of practice
News
8 months ago
by MAGDALINE SAYA REPORTER
News
01 February 2022 - 23:00