Gideon said that as KANU, they will stick with OKA and support Kalonzo.

• He said as OKA, they put God first as they drum political support across the country in Kalonzo's favour ahead of the forthcoming general elections.

• Gideon urged the electorate from lower Eastern region to unite behind their leader Kalonzo Musyoka. 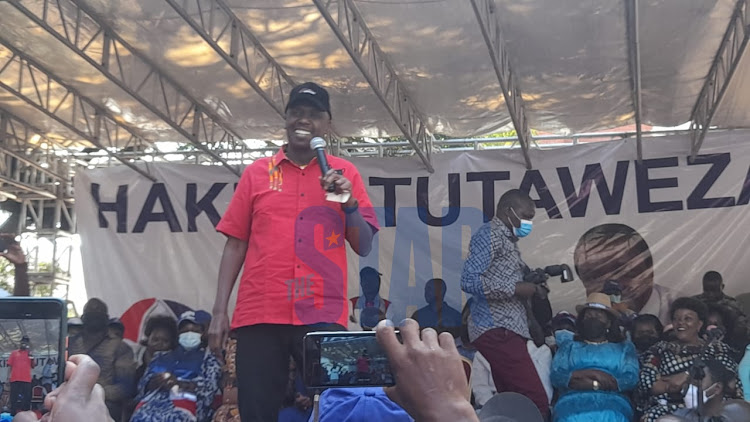 KANU party leader Gideon Moi has said they are in One Kenya Alliance to stay.

Gideon said that as KANU, they will stick with OKA and support Wiper leader Kalonzo Musyoka to ensure he becomes the fifth president on August 9th.

"We are in OKA, and will stay in OKA. We will remain in OKA as we look for other friends in the future coalitions," Gideon said.

Gideon spoke during a voter registration mobilisation exercise held by OKA at Mulu Mutisya grounds in Machakos county on Saturday.

He said as OKA, they put God first as they drum up political support across the country in Kalonzo's favour ahead of the forthcoming general elections.

The KANU party leader urged the electorates from lower Eastern region to unite behind their leader Kalonzo Musyoka.

"Today I have arrived here with joy. I am urging you to be united behind your leader Kalonzo Musyoka," Gideon said adding, "mbele uko sawa. I'm urging Eastern region to be behind Kalonzo Musyoka."

He praised NARC Kenya Martha Karua for choosing to work with them in OKA.

He said the former minister was principled and with exemplary track record.

"I'm happy to be with Martha Karua today. She is incorruptible. Have you ever heard that Karua has been involved in corruption?" Gideon poised.

Gideon said both Karua and Kalonzo were incorruptible with admirable track records.

"I'm happy today to be with Martha Karua, the Iron Lady. I wonder why she isn't in KANU party," Gideon said.

He said they also have principles in KANU, "and we don't wonder around. We have a stand and that's why we don't move around like drunkards."

The event was attended by several Wiper MPs, senators, women representatives, MCAs and aspirants who vowed to support Kalonzo to the ballot.

They expressed their confidence that Kalonzo will be the fifth president of Kenya.

Karua said Kenya was rich in leadership and therefore the two horse race narrative on 2022 presidential race was neither here nor there.

She said the fifth president was in their midst.

OKA in Machakos to mobilise residents to register as voters

"The forces that were a hindrance and opposed the idea have chickened out."
Opinion
1 year ago
Post a comment
WATCH: The latest videos from the Star
by GEORGE OWITI Correspondent
News
29 January 2022 - 19:39
Read The E-Paper