Security ramped up after warning of terror attacks

• Shioso asked the public to report any suspicious happenings in their areas.

• The French, German and Dutch governments warned of a possible terror attack in the country. 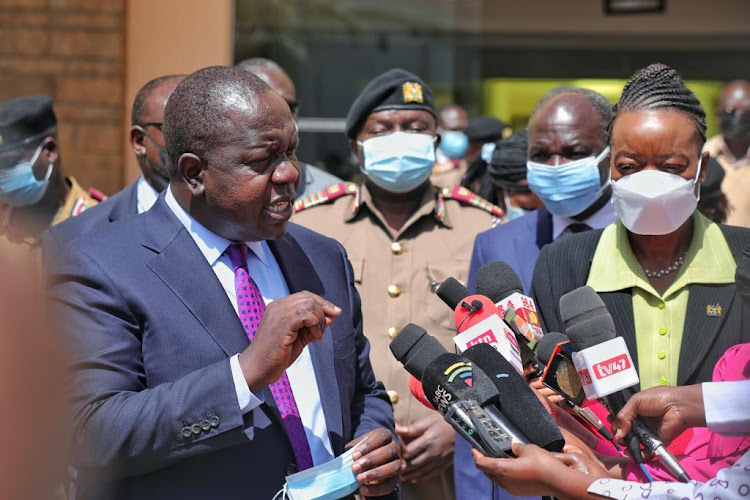 Security agencies have ramped up operations to disrupt any terror attack plans in the country.

Police headquarters told Kenyans to remain vigilant and warned there would be disruptive measures in some places, including major roads and premises.

More checks were being mounted at road entrances to various premises.

Police spokesman Bruno Shioso said Friday that they had progressively fortified their security systems in information sharing, and they value credible, authentic and verifiable information.

“The service has re-engineered her police units in line with modern-day policing dynamics, challenges and emerging threats. Security operations that ensure that imminent attacks are forestalled proactively remain our priority,” he said.

He said they had scaled up operations in the country and assured the public of safety.

Shioso asked the public to report any suspicious happenings in their areas.

The move to issue a statement on Friday came after the French, German and Dutch governments warned of a possible terror attack in the country.

The French government warned its citizens in Kenya on Thursday of a looming terror attack in Nairobi targeting places frequented by foreigners.

The French Ministry of Foreign Affairs cautioned its citizens as well as expatriates from other Western countries to avoid public areas and crowded places it classified as possible hotspots.

These include hotels, restaurants, leisure spots and commercial centres in the city.

It called on foreigners living and working in Nairobi to exercise extreme vigilance in the coming days, especially this weekend.

The German embassy also issued a warning that over the next few days its citizens in Kenya should pay special attention when out in public and be alert.

This is in addition to the general rules that the embassy has for its nationals whenever they are out in public.

Kenya says it has disrupted many terror plans in the recent past.

Interior Cabinet Secretary Fred Matiang’i said terrorism remains a threat in the country and urged the public to continue being vigilant.

“Don’t drop your guard. The threat is real and out there. We have disrupted many terror plans through public cooperation, but we urge for continued help to tame this problem,” he said.

On Friday, President Uhuru Kenyatta met the country’s top security chiefs to discuss the coming polls and security at large.

He was informed security situation remains stable in most parts of the country, safe for places near the Kenya-Somalia border.

Terrorists have increased attacks in parts of Lamu county in the last month, leaving more than 20 people dead and others displaced.

The gang has also targeted a construction company in the area and destroyed its eight trucks in an attack.

More security officials have been deployed there to tame the attacks.

The government gazetted parts of Lamu county as ‘disturbed areas’ and dispatched a multi-agency security team to restore peace and order following the attacks.

Apart from the terror elements, the government has blamed ethnic profiling that is linked to political inclinations around elections, the looming voter registration drive, and land disputes as the primary causes of the latest attacks and displacements in Lamu.

France cautions its citizens in Kenya against terror threats

The statement said that terrorists are targeting foreign nationals.
News
10 months ago

Public events, such as demonstrations and celebratory gatherings, are also at a higher risk.
News
10 months ago

Security operations ramped up ahead of DusitD2 third anniversary

A car bomb exploded Wednesday outside the international airport in  Mogadishu, killing at least 9 people
News
10 months ago
Post a comment
WATCH: The latest videos from the Star
by CYRUS OMBATI
News
28 January 2022 - 23:00
Read The E-Paper