•The union SG called for a physical office to house council members for dons to present their grievances there.

•The SG said they have to go through the VC to reach members of the university councils. 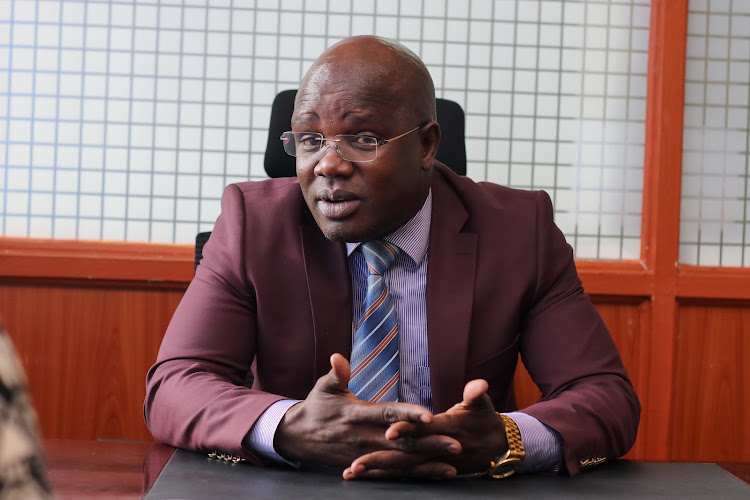 He said, their employer, the university council has no physical location to allow dons to visit them when need arises.

Wasonga spoke to the Star on January 25.

The union SG called for a physical office to house council members for dons to present their grievances there.

“I'm supposed to negotiate with the University Council and these councils you cannot meet them anywhere. We don’t know where they are domiciled,” Wasonga said.

Unlike the Teachers Service Commission whose head office is situated in Upper Hill, university councils have no permanent location.

“So if Knut or Kuppet wants to go and discuss something with TSC they can go to Upper hill and meet the commissioners but for universities, that’s not the case,” he said.

Wasonga faults the formed communication link which is the vice chancellors.

The SG said they have to go through the VC to reach members of the university councils.

“That is where the problem is, as a union we are supposed to negotiate with the university council, not the same VCs mismanaging universities,” he said.

He highlighted an example of Kisii university dons who have been unable to solve their grievances for quite some time.

“Kisii University dons have nowhere to go to, they are complaining, they are on the streets because of mismanagement by the vice chancellor,” he said.

Kisii University lecturers went on strike to demand the payment of their salary arrears and promotions.

The dons wanted tutorial fellows to be hired on permanent and pensionable terms.

Despite having a shaky relationship for years, Uasu and UoN renewed their vows after the union withdrew a court case that would see Kiama risk a six-month jail term.

The relationship was mended and Wasonga hopes it will improve working relations.

Wasonga objected to the move to downsize staff in public universities saying the move is not well drafted.

“The government is not ready to give them a package to go home, so how can that happen?” Wasonga asked.

He faulted the government for taking too long to approve a downsizing proposal made by Egerton University.

The varsity submitted a proposal to lay off 400 members of staff citing overwhelming financial conditions.

They announced a layoff plan and a cut on allowances following a cash crunch caused by a drop in students’ enrolment.

In an interview with the Star, Treasury Cabinet Secretary Ukur Yatani said the government is planning to slash varsities funding.

Yatani said universities must be innovative in dealing with their challenges.

Wasonga said universities are not in a position to internally generate enough income to run activities.

“When you stop funding universities, what do you want them to do? Where do you expect them to get money?” he asked.

Wasonga said more problems are likely to arise because of the financial crisis.

“If you stop funding then it means you want to close the universities,” he said.

Wasonga faulted the government for introducing a new funding method to universities.

The differentiated unit cost funding model is pegged on courses offered by a university.

The government is expected to cater for 80 per cent of the funds.

The remaining is to be generated by students and the institution.

The union SG said the model is the cause of the financial crisis in the universities.

“When the government gives universities, 53 per cent, where do they expect them to get the remaining 47 per cent when we no longer have parallel students,” he said.

In a previous interview with the Star, he said UoN had its capitation reduced from Sh6.2 billion per year to Sh4.5billion.

The move to enrol government-sponsored students in private universities has been faulted for causing the cash crunch.

Since 2016, private universities host 14.8 per cent of the total population of government-sponsored students.

The Ministry of Education rolled out this programme in 2016 following a directive by President Uhuru Kenyatta.

Wasonga said most of the funds being dished out to the privately-owned institutions would be best utilised in public universities.

“Public universities are struggling but the government is taking government-sponsored students to private universities,” he said.

He called on the government to consider increasing funds to the State-owned enterprises which are currently financially crippled.

The plan to merge public universities as a way to deal with the financial crisis received major opposition from dons.

The World Bank’s push for the merger of state universities and corporations was revealed in an advisory to the government.