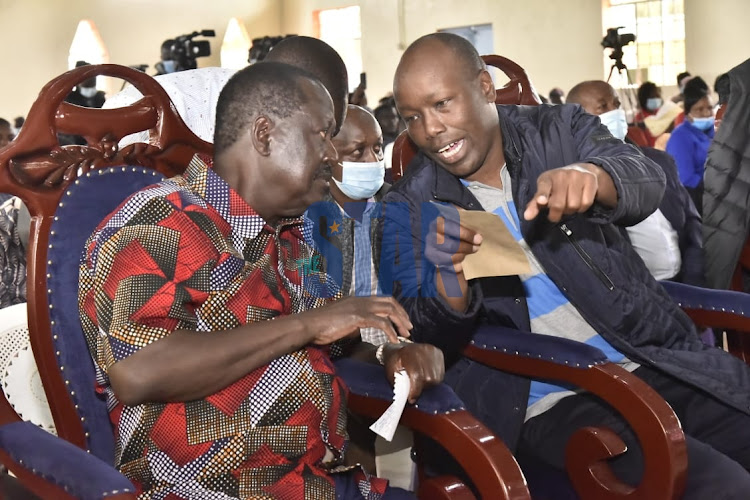 Former Prime Minister Raila Odinga’s Azimio movement faces a make-or-break moment when it will pick candidates for the August 9 polls.

The movement is planning to conduct joint nominations with affiliate parties presenting political bigwigs to face off, especially in Raila's strongholds.

Raila announced last week that the coalition party will only back one candidate in each political seat.

However, joint nominations have not been possible in Raila's previous two coalitions, NASA and CORD.

Without joint nominations, Azimio is likely to lose to rival parties as they will be dividing their votes.

In Kakamega, for instance, ODM has at least three gubernatorial candidates.

However, Lugari MP Ayub Savula is also gunning for the same seat under DAP-K.

In Vihiga, Governor Wilber Ottichilo is defending his seat on ODM while former Speaker Kenneth Marende is contesting for the same on DAPK.

Vihiga Senator George Khaniri, said to be on his way out of ANC, will also be gunning for governor on an Azimio affiliated party

The same case in Kajiado county where Azimio nominations are already creating confusion and uncertainty.

Already, ODM followers in the county fronted their candidate, David Nkedianye, who is a former governor.

On the other hand, there is governor Joseph Ole Lenku who was elected on Jubilee but is now an ardent Azimio supporter.

Speaking to the Star on phone, Democratic Action Party of Kenya (DAPK) Secretray General Eseli Simiyu admitted to the nomination hurdle but exuded confidence that a way out will be found soon.

The Tongaren MP disclosed the Azimio affiliated parties have started engaging on the best method to adopt for primaries ahead of the IEBC deadline.

According to Independent Electoral and Boundaries Commission’s timelines, political parties must conduct their primaries between April 16 and April 22.

“The nomination headache is there but we must find a solution to it, it is a work in progress,” the deputy minority whip said on phone.

“Nominations are a problem in all the parties and coalitions, even the coalition of ANC and UDA will have a nomination headache."

ODM has in the past been accused of chaotic nominations, something the party has tried to resolve through a number of reforms.

Pundits have listed over 10 counties where Azimio is expected to face serious nomination pitfalls.

DAPK chairman Wafula Wamunyinyi is however confident the new vehicle will weather storms and remain united even after the exercise.

“It is not good to get contradictory messages, we should wait until we sit down and agree on how we will do it, whether it will be a joint nomination or we zone the country,” he said.

“When you are bringing together many parties, every party has its position but at the end of the day we agree on the best way for us to realise our goal of beating Tangatanga.”

Supporters of Azimio are hopeful the Political Parties (Amendment) Bill, 2021 will set into motion formation of the coalition party.

The Bill, which was passed by the National Assembly and the Senate, was assented by the President on Thursday.

Azimio to work out mechanism to prevent falling outs, defections after primaries.
News
3 months ago

He notes that the yet to be registered Azimio Coalition Party will zone the country based on parties' political strengths.
News
3 months ago
by LUKE AWICH AND KURGAT MARINDANY
News
28 January 2022 - 06:20