• Raila added that Kenyans are aware of the right leaders and that they will not vote for the thieves who have stolen from them.

• The former PM added that Kenyans are ready for the third liberation which is about the economy of the country. 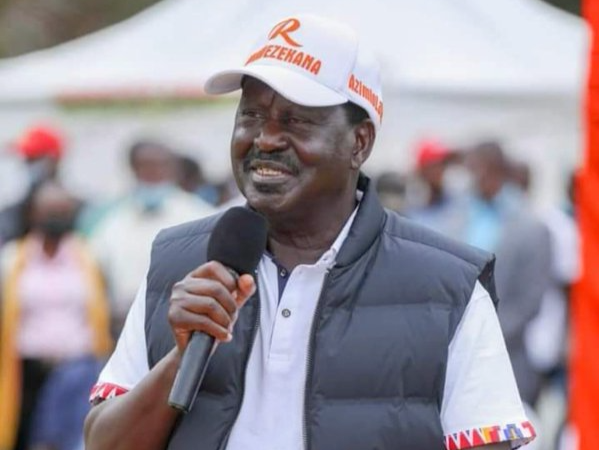 ODM leader Raila Odinga has for the first time weighed in on the alliance pitting UDA, ANC and Ford-Kenya parties.

The opposition chief on Thursday exuded condifence in his presidential bid saying he is not bothered by the pact between Deputy President William Ruto and ANC leader Musalia Mudavadi.

Loosely translated to: " If you want to go, you go for good. There is an adage that says birds of the same feathers flock together. There is something that unites the two people. He knows there is something referred to as a common denominator".

The ODM leader spoke at the party headquarters when he received a number of politicians who joined the party from ANC.

He said that they have good plans with the right people who are willing to work with them and assured the Azimio la Umoja members that things will start working out soon.

Raila added that Kenyans are aware of the right leaders and that they will not vote for the thieves who have stolen from them.

“Kenya is not on sale. Kenya will not be bought by money that has been stolen from the people of Kenya, we will liberate Kenya forever from these people. We did it from the shackles of dictatorship in the second regime that was torturing its people…”

The former PM added that the same Kenyans who liberated the country from the second regime will liberate the country in the third liberation as well, which he said is about the economy.

Also, he said that the Azimio movement is set to be officially registered next week.

“Azimio la Umoja is going to be registered next week, if not tomorrow…and we will start moving straight to our people.”

Uhuru: I am disappointed in Mudavadi

The President said Musalia had frustrated him despite being 'friends.'
News
3 months ago