Kenyans more disappointed in you, Musalia fires back at Uhuru

The ANC boss said the President has frustrated Kenyans and dampened their hopes. 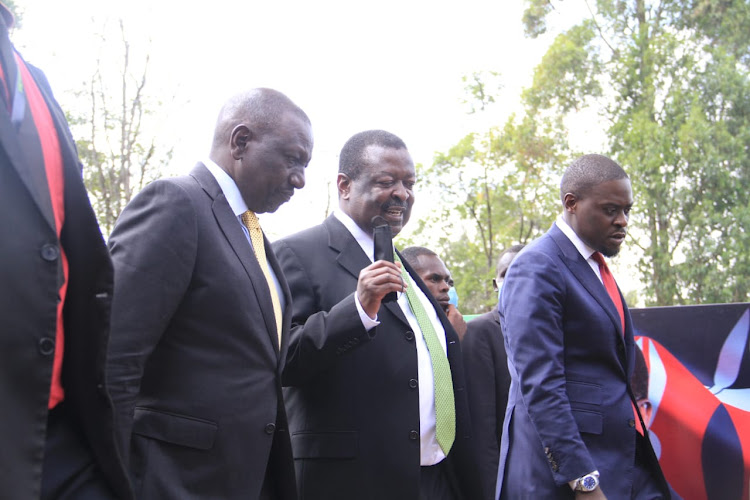 Amani National Congress leader Musalia Mudavadi has told off President Uhuru Kenyatta over his remarks that he had disappointed him.

The ANC leader said it is Kenyans who are even more disappointed in Uhuru.

Musalia, who is accompanying Deputy President William Ruto in a charm offensive of the Rift Valley, said the government has frustrated Kenyans.

"I want to tell my friend President Uhuru Kenyatta that you have a right to be disappointed, but Kenyans are even more disappointed," Musalia said at Eldama Ravine.

"Kenyans are hungry, have a big tax burden, are overcharged, and they are jobless and hustling, they are disappointed, Tusidanganyane (let us not lie to ourselves)."

The President had reportedly told leaders from Musalia's Western Kenya turf that the ANC boss had disappointed after joining forces with Ruto.

At the same time, Musalia said Kenyan will not accept a government project as their next president.

In reference to ODM boss Raila Odinga, Musalia said Azimio la Umoja is a "stalled project just like many other stalled government projects."

I am running for presidency, nothing else- Mudavadi

Mudavadi said his party has given him only one mandate;  bring the presidency home.
News
3 months ago

Uhuru: I am disappointed in Mudavadi

The President said Musalia had frustrated him despite being 'friends.'
News
3 months ago
by JAMES MBAKA Deputy Political Editor
News
26 January 2022 - 12:36