Some 541 Kenyans are likely to benefit if there's compensation 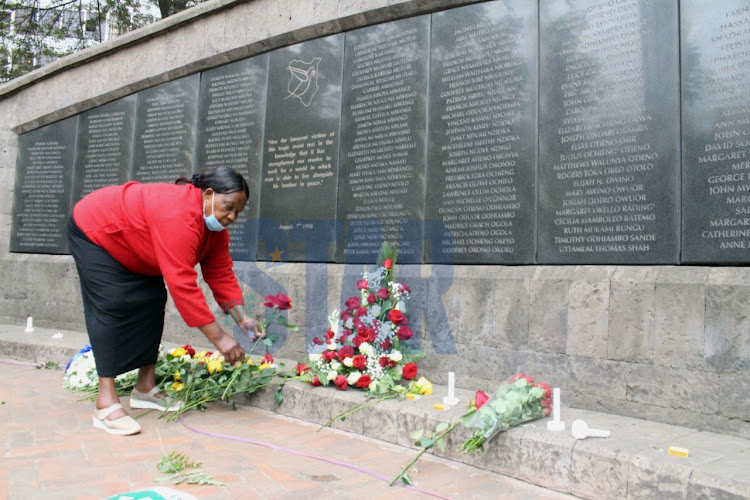 Beatrice Njiraini, a victim of 1998 US Embassy bombing, places flowers at the memorial site in Nairobi on August 7 last year/ANDREW KASUKU

A glimmer of hope has shone on the victims of the 1998 bombing after an American law firm involved in the legal fight for their compensation asked them to reach out.

Washington DC-based law firm Musolino and Dessel PLLC put out an advert on Tuesday calling for some 541 Kenyans who are said to be victims, and whom it said it named in its compensation law suit, to reach it by the end of this month.

The bombing at the Nairobi US embassy by two suicide terrorists killed hundreds and injured countless more in an attack for which Al Qaeda claimed responsibility.

The law firm said in the notice published in the dailies that the potential victims, whom it had named as plaintiffs in the case, should go to its website (musolinoanddessel.com) to check if their names are listed and reach out.

“If your or a family member's name appears on the list below, please send us your contact information using [a provided link],” it said.

The firm said it had filed the case in question in 1999 and named the victims but did not have their contacts.

“If your name is on the list, please contact the law firm immediately. A court deadline of January 31, 2022 may affect you,” the announcement said.

Though the firm did not specify why it called the victims to reach it, the moves raises hope of bringing to close the 24 years of search for justice by the victims.

Victims like civil servant Diana Mutisya have expressed frustration by the long delay that has plagued the quest for compensation decades on.

This after the Sudan government agreed to released some $335 million for compensations for victims of the attack early last year.

But Kenyan victims were not included in the list of the potential beneficiaries as it only targeted victims who were US nationals or workers for the country’s embassy.

Sudan agreed to undertake the compensation as a condition by the United States to be cleared from its list of state sponsors of terror.

The Nairobi bombers were said to have been harboured in Sudan for planning in the run up to the attack.

Mutisya, speaking for the victims, had told a press outlet last year that she “felt awful [to hear about the compensation deal]..” and that “we were affected because of the enmity between the US and the attackers. They should give us consideration.”

The Kenyan victims have argued that their exclusion from the Sudan compensation list equalled discrimination and a suggestion that US citizens were superior to them.

"Americans cannot be superior. We are all human beings... If anything, we're innocent. This thing happened because of them. [The attackers] were targeting the American embassy where they knew American citizens were," Mutisya said.

Douglas Sidialo, who lost his sight in the blast, told the Star in a past interview that the US only supported the victims for three years from 1999 but has never come back to them again.

Post a comment
WATCH: The latest videos from the Star
by GORDON OSEN News Journalist
News
25 January 2022 - 23:00
Read The E-Paper